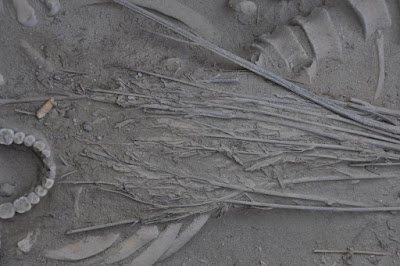 SOME people choose to be buried with objects that are emblematic of what they cared for in life.

In the case of a 2,400-year-old skeleton recently uncovered in northwest China, a warrior shaman chose to be buried in a cannabis shroud.

A team of archaeologists from the University of Chinese Academy of Sciences unearthed the tomb in China's 240-grave Jiayi cemetery near Turpan, which was once a waypoint along the Silk Road.

Thirteen cannabis plants were found covering the body. This is the first time archaeologists have discovered a quantity of well-preserved cannabis plants and it provides information on how the plant was used in ancient Eurasian cultures.

National Geographic reports that the plants were placed across the 35-year-old man's chest with their roots below his pelvis and the tops of the plants reaching up past his chin to the left side of his face ... as if they were a shroud.

The researchers’ article on the discovery in the journal Economic Botany argues that:

"This unique discovery provides new insight into the ritualistic use of Cannabis in prehistoric Central Eurasia. Furthermore, the fragmented infructescences of Cannabis discovered in other tombs of the Jiayi cemetery, together with similar Cannabis remains recovered from coeval tombs in the ancient Turpan cemetery along with those found in the Altai Mountains region, reveal that Cannabis was used by the local Central Eurasian people for ritual and/or medicinal purposes in the first millennium before the Christian era."