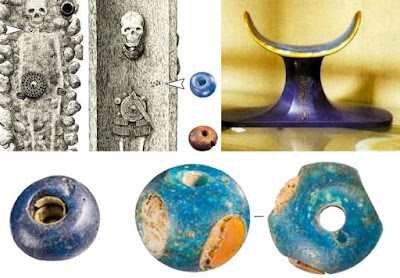 STUNNING glass beads found in Danish Bronze Age burials dating to 3400 years ago turn out to have come from ancient Egypt … in fact, from the workshop that made the blue beads buried with the famous boy-king Tutankhamun.

The discovery proves that there were established trade routes between the far north and Levant as early as the 13th Century BC.

Twenty-three of the glass beads found in Danish Bronze Age burials by the team of Danish and French archaeologists were blue, a rare color in ancient times.

"Lapis lazuli was the most precious gemstone in Nordic Late Bronze Age. Blue glass was the next best thing," said Jeanette Varberg, who is associated with the research. 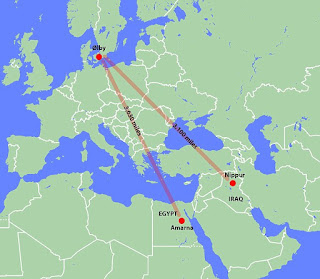 "In the north it must have been almost magic. A piece of heaven." (Lapis lazuli is a deep blue semi-precious gemstone.)

The blue beads aren't the only evidence of trade between ancient Denmark and the region. Altogether 271 glass beads have been found at 51 burials sites in Denmark.

The majority of them originated from Nippur, Mesopotamia, about 50 km southeast of today's Baghdad in Iraq.

One of the blue glass beads was found with a Bronze Age woman buried in Olby, Denmark, in a hollowed oak coffin wearing a sun disc, a smart string skirt decorated with tinkling, small bronze tubes (a decoration on the cords, placed at the front of the skirt), and an overarm bracelet made of amber beads. She had evidently been quite well to do.