'MUD BRICK MANHATTAN' ON THE NILE
HAD HIGH-RISE COMMERCE TOWERS 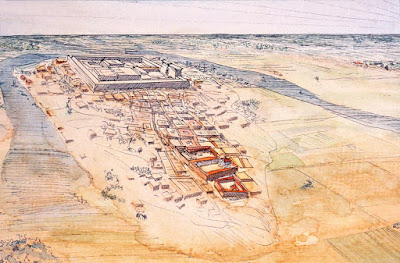 ONE of the most beautiful sculptures of Antinous comes from the Ancient Egyptian the city of Naukratis, which experts now say was a major Greek trading port on a branch of the Nile River with high-rise towers of commerce.

It is possible that Hadrian and Antinous visited this bustling trade center in 130 AD ... and a gorgeous marble head of Antinous wearing a myrtle wreath sacred, myrtle being sacred to Aphrodite and there being a well-known shrine to Aphrodite in Naukrates, which was located on the west arm of the Nile not to far upstream from Canopus and Hierakleion. 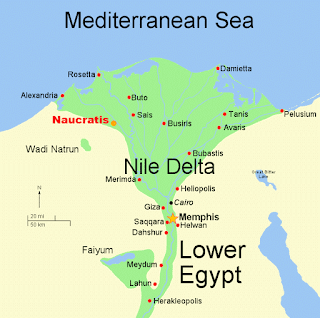 Archaeologists had thought that they had found everything there was to find in the ruins of this ancient city.

But a new excavation by the British Museum has turned up thousands of new artifacts and revealed an even bigger, bustling city, of "tower houses" that stood three to six stories tall.

Naukratis was "a mud-brick Manhattan" with a population of around 16,000, the project's leader told the Guardian.

Among the new finds were wood from Greek ships … evidence backing up Herodotus' description of the city as a port served by cargo ships, even though it's fairly far inland from the Mediterranean Sea. 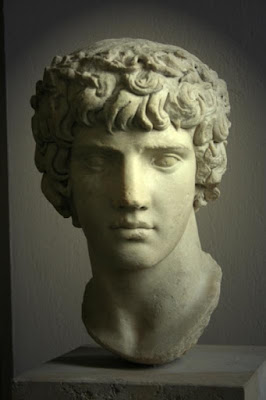 To top that off, the team found Egyptian figurines associated with a "festival of drunkenness," the Guardian says.

Naukratis was first rediscovered more than 130 years ago, by British Egyptologist William Matthew Flinders Petrie. The city was one of the most sought after ancient places, but no one was quite sure where it had been located.

Petrie found it essentially by accident. Setting out from Cairo, he happened upon the right spot, where, he wrote:

The whole ground is thick with early Greek pottery, and it seemed almost a sacrilege to walk over the heaps with the fine lustrous black ware crunching under one[’]s boots. Pieces with fret pattern, honeysuckle pattern, heads, arms, legs of figures, horses, & such like lovely things were soon picked up; both in black figures on an orange ground, & red figures on a black ground, mostly with incised outlines. It seemed as if I was wandering in the smashings of the Museum vase-rooms.

After extensive early excavations, it seemed like most of those treasure had been gathered up … such as the stunning Antinous Naukratis head. 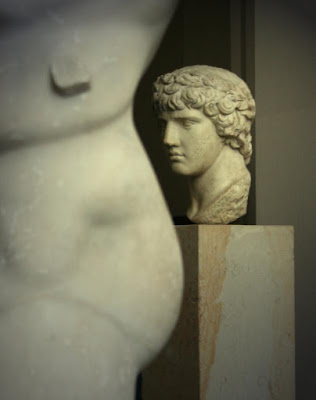 But as the new excavation proved, there was plenty more to be discovered.
Naukrates was a Greek colony in Egypt dating back to the 6th Century BC ... the 26th Dynasty, that age of "recon" revival in all things lovely and magical.

And Nectanebo I, last of the magician/kings of Egypt, erected a splendid Old-Kingdom-style stele at Naukrates praising the sacred relationship between the old gods of Egypt and the "new" gods of Greece and their interconnectedness.

Basically, it's a tax decree stele, but the sacred references are the most enlightening bit since Egyptian tax money helped to support the Greek gods ... seeing as how they were all Egyptian gods as well.

By Hadrian's time, of course, Naukratis had been eclipsed by Alexandria.

But it was still a major Greek trading town with a long Hellenistic tradition and with several well-known Greek temples. Besides the one to Aphrodite, there were also shrines and temples to Apollo, Hera, Dioscuri and others.

It was a well-known Hellenistic enclave and important old Greek merchant town.

So Hadrian would have known about it. Who knows whether he and the Beauteous Boy actually stopped off there, seeing as how it was pretty much in serious decline by the 2nd Century AD.

But it makes sense that an Antinous head might have been produced there.