NASHVILLE PARTHENON IN TRUE COLORS
THANKS TO DIGITAL TECHNOLOGY 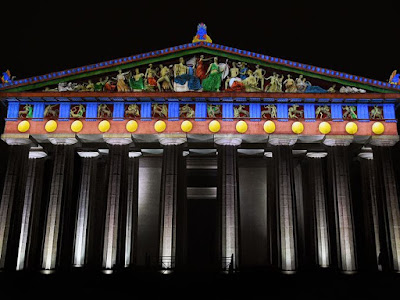 NASHVILLE's full size replica of the Greek Parthenon sports its true colors this week in an extraordinary digital experiment.

Tokyo Broadcasting Systems projected what are believed to be the original colors of the ancient temple onto Nashville's replica. 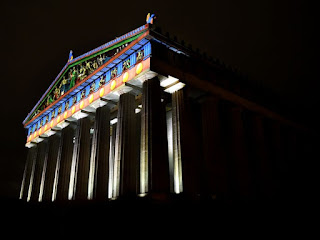 The event is part of a travelogue show whose name translates into English as "Discover the World’s Wonders."

During the unveiling, the transformation of the tan-colored building that forms the centerpiece of Nashville’s Centennial Park was accompanied by music from performers with Nashville’s Blackbird Theater. 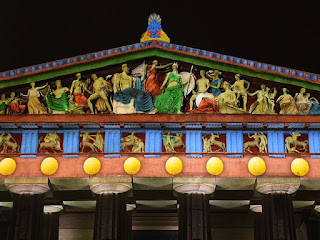 "No one in modern age has ever seen the Parthenon in full color as it originally appeared over 2,500 years ago. We are so lucky to find out Nashville's full-scale replica is available for this project," said project director Masanobu Miyoshi of Sekai Fushigi Hakken.

Projection mapping was done on the entablature (above column) portion of the front side of the Parthenon, while columns was lit in white.

TBS and city officials have worked together for two months to finalize the colors, which are based on various studies from The British Museum and Greek archaeologists.