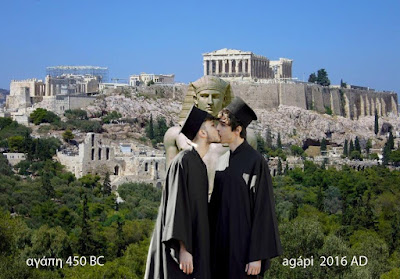 This comes after years of opposition from the Greek Orthodox Church and following a controversial European court ruling.

Although Greece allowed such agreements for heterosexual couples in 2008, it had excluded homosexual couples, a move which the European Court of Human Rights ruled discriminatory in 2013.

Last week the Greek parliament brought legislation in line with the court's demands.

Prime Minister Alexis Tsipras, who has promised social reforms to mitigate the negative impact of its EU/IMF bailout, said the bill closed "a cycle of embarrassment for the nation".

"Today we recognize the right of all people, regardless gender and sexual orientation, to live together and choose their own path in life as they see it fit. To have equal rights in life and death like all Greek citizens," Tsipras told parliament.

The bill does not allow same-sex couples to marry or adopt children and does not give them similar pension, labour and tax rights, gay activists said.

"We have to say that it is a very small step in comparison to the great, the huge inequalities faced by the LGBTQ+ people in Greece," said activist Dimitra Kyrilou, a civil engineer.

The bill was rejected by the Orthodox Church, the Communist party and the far-right Golden Dawn Party, whose leader said "church bells should toll mournfully across the country".

A growing number of European countries have established legislation allowing registered partnership rights to same-sex couples, including Britain, Spain and Cyprus, but the issue remains contentious in many other EU nations.

The image at the top of this entry is a montage by ANDRÉ DURAND of two GLBT protesters (dressed as Orthodox priests), who staged a kiss-in outside the Greek parliament, with a statue of Antinous/Osiris and with the Acropolis in the background. André entitles it "Agápe" ... the Greek word for brotherly love, charity, the love of a God for a man and of a man for his God.