ARE EVEN BETTER NEFERTITI TREASURES
HIDDEN IN TUTANKHAMUN'S TOMB? 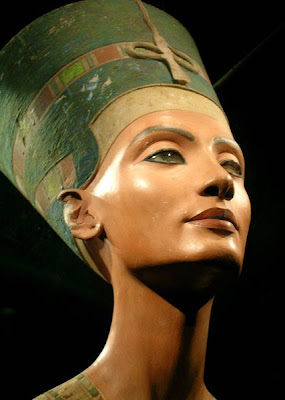 ANY day now experts may announce the biggest archaeological discovery of the 21st Century ... chambers or passageways hidden behind secret doors in Tutankhamun's Tomb.

Amid mounting excitement, we remember the discovery of this famous bust of Nefertiti, which now resides at Berlin's NEUES MUSEUM, new home of the world-famous Berlin Egyptian collection.

It was on December 6, 1912, that a German archeologist, Ludwig Borchard, unearthed a 3,300-year-old painted stone bust of Nefertiti in southern Egypt and carried it off to Germany.

Borchardt and his team excavated up to 7,000 archaeological objects in Akhenaten, located barely 20 kms south of ANTINOOPOLIS. About 5,500 of those objects made their way to Berlin.

Despite persistent rumors that Borchardt smuggled out the Nefertiti bust under a coating of mud, the plain truth of the matter is that Ottoman authorities failed to recognize the bust as a masterpiece.

In those days, the uniquely fluid style of the Amarna Period was viewed as an "aberrant" deviation from traditional styles of other Egyptian periods.

The discovery of Tutankhamun's tomb in 1922 spawned an Egyptomania craze as well as the Art Deco style. King Tut's treasures flaunted the "aberrant" style of the late 18th Dynasty, and Nefertiti suddenly was a fashion trend-setter.

Crowds flocked to the Berlin museum to see Nefertiti and shame-faced Egyptian authorities realized they had made a ghastly mistake back in 1912.

When Hitler came to power in 1933 the Egyptian government renewed its demands for Nefertiti's return -- counting on Hitler's anti-Semitism. Hermann Goering was new premier of Prussia, including Berlin. As head of Berlin's museums, Goering hinted to King Fouad I of Egypt that Nefertiti would indeed soon be back in Cairo. 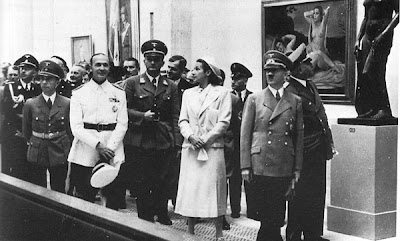 "I know this famous bust," the fuehrer wrote. "I have viewed it and marvelled at it many times. Nefertiti continually delights me. The bust is a unique masterpiece, a precious adornment, a true treasure!"

"Do you know what Im going to do one day? I'm going to build a new Egyptian museum in Berlin," Hitler wrote.

"I dream of it. Inside I will build a chamber, crowned by a large dome. In the middle, this wonder, Nefertiti, will be enthroned. I will never relinquish this bust of the Queen." 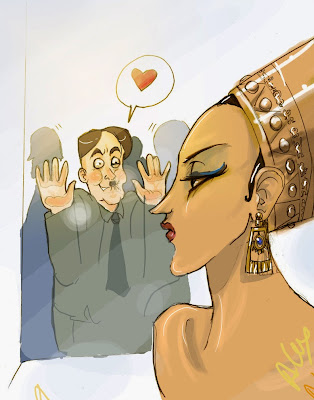 It was rumored immediately after World War II that Hitler had commissioned a copy of the bust for possible handover to the Egyptians after a Nazi victory.

American Allied art experts claimed they found two wooden crates in a salt mine south of Berlin where the German capital's museum art treasures had been placed by the Germans for safekeeping during bombing raids.

But in post-war confusion, one of the crates got lost. The whereabouts of the "other Nefertiti" are unknown ... assuming it ever existed to start with.

But infrared scans of the bust in 2009 proved definitively that the bust on view in Berlin was indeed sculpted in ancient times ... and is not a modern copy.

Hitler and his mad dreams are long dead. But Nefertiti continues to smile serenely. In 2009 she and the entire Berlin Egyptian collection moved to new/old quarters in the Neues Museum, where the she and thousands of other Amarna treasures are on display in the historic new exhibition.

Many of these have never been on display before, but around 600 have been restored and are being unveiled as part of the exhibition. The display will be supplemented with loans from other museums abroad, including the Metropolitan Museum of Art in New York, the Louvre in Paris and London's British Museum.
Posted by Hernestus at 12:40 PM