ANTINOUS ARRIVES IN DELPHI
SITE OF THE FAMED APOLLO ORACLE 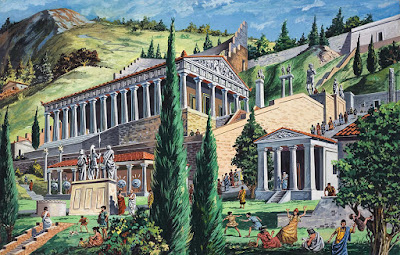 DURING the December Solstice, the Religion of Antinous commemorates the magical day in the year 128 AD when Antinous and Hadrian visited the Oracle of Delphi.

Hadrian and Antinous entered Delphi at the magical time when Dionysus was the supreme deity of the shrine. 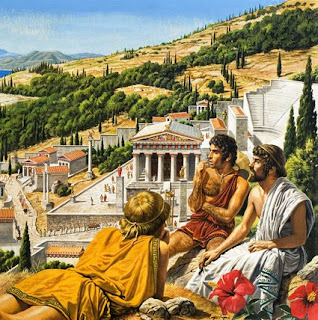 They solemnly advanced in procession up the sacred way, and entered the Temple of Apollo, the oracle of Apollo.

The Oracle may not have been in consultation, and there is no evidence of Antinous or Hadrian receiving her words.

Antinous was further instructed in the mysteries of Orpheus by his priests who were a religious order devoted to Dionysus, and limited to men.

Having been initiated in Athens into the dark mysteries that Orpheus revealed of death and resurrection, Antinous was here shown the high Orphic Secrets of Creation.

The meaning of the egg of the dark bird of Night was infused into the deepening abyss the mystery of Antinous during this visit. 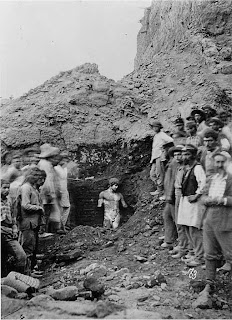 And the full brilliance of Antinous Invictus was ignited as Phanes-Beauty, Eros-Love, and Zagreus-Ecstasy were awakened within him.

An exquisite statue of Antinous was discovered at Delphi. The forearms had been broken off, but the ancient priests had lovingly buried the statue standing upright.

That was the way it was found in the 19th Century, incredibly intact except for the missing forearms.

Alas, Antinous would drown in the similarly magical waters of the River Nile only a few scant months after visiting Delphi, during what we call the imperial "Three-Year Peregrination" ... the wondrous and fateful final three-year Eastern Empire travels of Hadrian and Antinous.
Posted by Hernestus at 9:00 AM