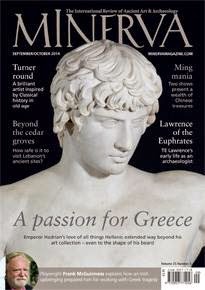 GET the October edition of MINERVA magazine for the cover story: "A Passion for Greece: Emperor Hadrian's Love of all things Greek."

It focuses on the CURRENT EXHIBIT at Hadrian's Villa (Tivoli) which ends November 2.

Also included a brief article on a recently discovered/sold sculpture of Antinous in Derbyshire in the UK.

The marble bust, about which nothing was known when it was discovered in a British country house four years ago, has been identified as a 2nd Century Roman portrait of Antinous-Osiris.

It has now been sold to an American collector for a six-figure sum. 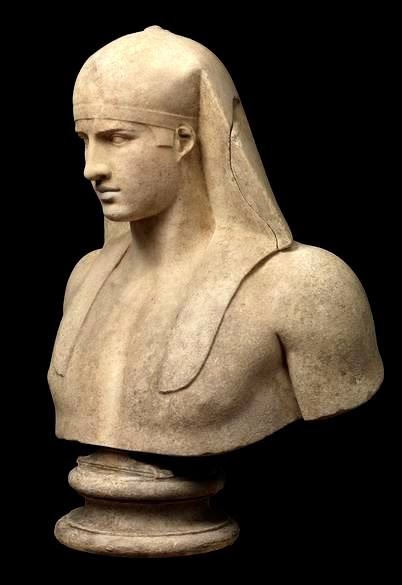 The bust, pictured, was found by Oliver Forge and Brendan Lynch, antiquities consultants, in Thornbridge Hall, Derbyshire, in 2010.

It is thought to have originally been located at Hadrian's Villa in Tivoli.

Excavated in 1769, it found its way into the sculpture collection of Thomas Hope in London, whose great grandson sold it at Christie's in 1917.

It was later acquired by Charles Boot, heir to a construction business, who bought Thornbridge Hall in 1930. When he died in 1945, the sculpture was sold with the house and its history forgotten.
Antonius Subia is elated about the find. He says:

"Just when you think that you have seen EVERY Antinous image there is from ancient times...another one turns up out of nowhere! And as we move into the sacred weeks of October...this is a Good One!
"Seeing his face again, as if for the first time...I am struck by how beautiful he is, and I can't help but fall in love all over again. Ave Antinous the Arisen God!"