IN MENNEFER, ANTINOUS LEARNS MYSTERIES
OF PTAH, SEKHMET AND NEFERTUM 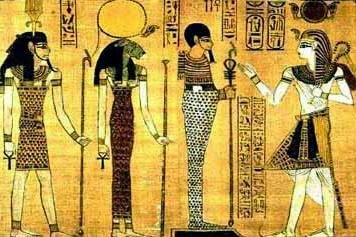 AT the beginning of October 130 AD, Hadrian and Antinous arrived in splendor at Memphis (Mennefer) the ancient capital of Egypt for many centuries, long before Alexandria was founded.

The Memphite cosmology holds that the god Ptah is the creator of the universe, that out of fire he creates Atum and the Ennead of nearby Heliopolis.

Ptah creates the Atum from his burning heart and speech, and then the Atum creates the world with his hands and semen.

In later days in Egypt, Ptah becomes a ruler of the underworld, or more specifically, of what lies beyond this world ... he is the root of the root.

He is accompanied two deities. First is his consort Sekhmet "the Mighty One" who represents war, destruction and yet also cathartic healing and invincible protection.

Ptah is also accompanied by their son Nefertum, whose name means "beautiful accomplisher of Atum" and who represents rebirth, preservation and regenerative healing.

Nefertum is depicted as a beautiful young man with a lotus blossom emerging from his head and striving sunward. 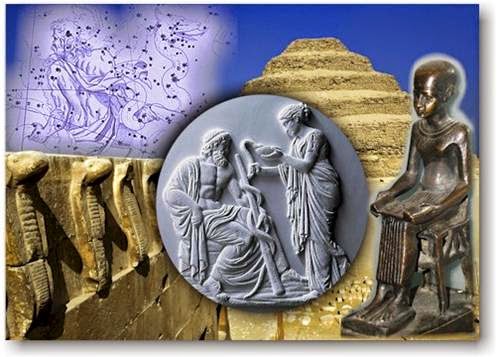 Antinous was also told of IMHOTEP, the only other non-royal mortal ever to be deified by the Egyptians.

He was an architect, physician, artist and scientist who lived 3,000 years before Antinous was born.

Imhotep had stood out from all others for his knowledge and wisdom ... and he had became a god, always depicted as a scholar sitting with books on his lap and sometimes as the Egyptian Aesculapius, god of medicine.

Antinous was exposed to these mysteries which brought him deeper into the unfolding of the nature of the universe and the identity of the first principle of creation ... of how one mortal man can change the course of the world.

He was initiated into the double nature of creation, through Sekhmet and Nefertum. He gained insights into the divine nature of mortal humans through Imhotep.

Pictured at top is the Memphite triad with a very white-skinned king who resembles Antinous.