AMPHIPOLIS TOMB MOSAIC DEPICTS
THE ABDUCTION OF PROSERPINE BY PLUTO 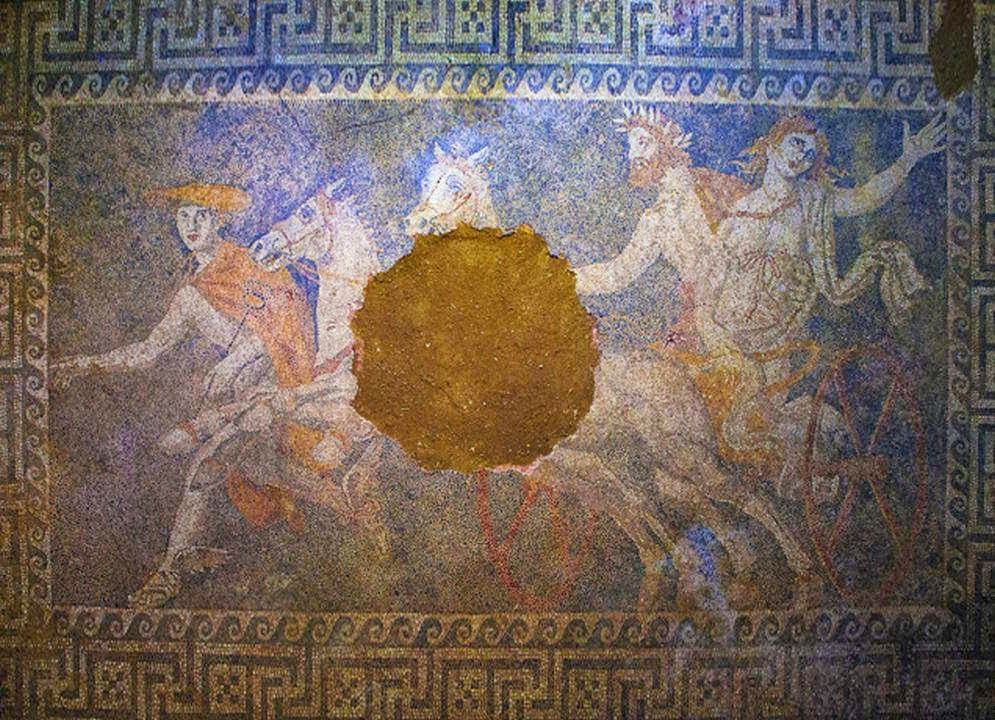 EXPERTS working at the mysterious large tomb at AMPHIPOLIS in Macedonia, Greece, have uncovered the rest of the mosaic flooring of the second chamber ... revealing the Abduction of Proserpine/Persephone by Pluto.

The symbolism of the beautiful MOSAIC, which was discovered in the second chamber of the tomb and is the site of the CARYATIDS discovery, vastly increases the chances that this tomb houses a member of the Macedonian royal family.

In a news conference following the recent discovery of a stunning mosaic, Lena Mendoni, general secretary of the Greek Ministry of Culture,said that the scene of the abduction of Persephone gives archaeologists great certainty that the occupant of the mysterious tomb is a member of the Macedonian royal family.

"We have also found the scene of the abduction of Persephone in the mural of the so-called tomb of Persephone at the royal cemetery at Vergina, Greece. We have a second display of Pluto and Persephone, in a sacred marriage scene at the backrest of the marble throne found at the tomb of Eurydice, mother of Philip, in Aeges," she said.

"The scenes are linked with the cults of the underworld, the Orphic cult-descent into Hades and the Dionysian rites. The leader of the Macedons was always the archpriest of these cults," Mendoni added.

"Therefore, the mosaic scene in Amphipolis has a symbolic importance, which may indicate that there is a relationship of the 'tenant' of the tomb with the Macedonian royal family. The political symbolism is very strong at all times," she added.

Until now, archaeologists had only uncovered a portion of the mosaic showing Mercury-Hermes and a chariot driven by a bearded deity ... now identified as Pluto-Hades.

The colorful floor was laid with white, black, grey, blue, red and yellow pebbles and depicts a chariot in motion.

Mercury-Hermes, the messenger of the gods and guide to the Underworld, is pictured in front of the chariot driven by Pluto-Hades with his abducted bride-to-be in tow. 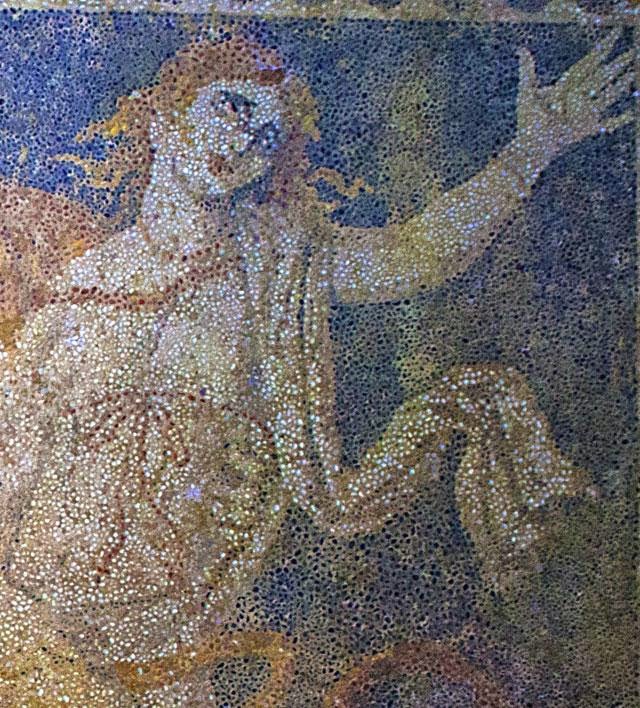 She is depicted with flowing auburn hair and wearing a white chiton trimmed in red ribbons. The ancient artists even gave her a jeweled ring for her left hand.

Her facial expression is strikingly detailed, her eyes displaying a plaintive look of woe.

The mosaic showcases the artists' abilities to portray the figures, horses and colors in exquisite detail.

The stunning artwork spans the entire floor of the second chamber. It measures 4.5 meters in width and 3 meters in length.

The central scene is surrounded by a decorative frame, 0.60 meters in width, featuring a double meander, squares and a wave-curl design.

According to archaeologists, the central a section of the mosaic floor was destroyed in antiquity. The Amphipolis team was able to recover many of the loose pieces of the mosaic during the excavation process, however, and plans on being able to eventually piece the mosaic back together.

Greek prime minister has said he is almost certain it must be the LOST TOMB OF ALEXANDER. Alexander sailed from Amphipolis to Asia. However, it is almost certain that his tomb is located in Alexandria, since people such as Julius Caesar, Hadrian and Antinous are supposed to have visited his burial site there.