INSCRIPTION COMMEMORATES THE VISIT
OF ANTINOUS AND HADRIAN TO JERUSALEM 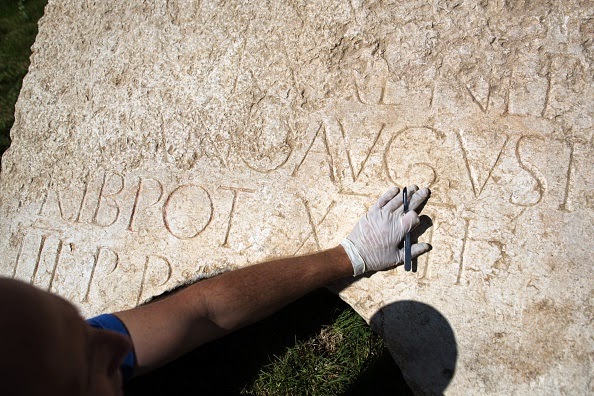 THIS amazing fragment of stone bears an inscription commemorating the visit of Antinous and Hadrian to Jerusalem on their fateful tour of Rome's eastern provinces … a tour which ended in the death of Antinous in October 130 AD.

The inscription proves that the 10th Legion was stationed in Jerusalem between the two Jewish Revolts and that troops were on hand when Antinous and Hadrian visited.

Jerusalem was a turning point in the Emperor's tour which, until then, had been glorious. But strife-torn Jerusalem set the stage for the tragic ending to the tour.

The stone engraved with an official Latin inscription dedicated to the Roman Emperor was discovered in the capital in July by the Antiquities Authority.

It has just now been unveiled at Rockefeller Museum in east Jerusalem.

It was probably part of Hadrian's own main gate into the Old City of Jerusalem.

It was found under the Mameluke Era Damascus Gate which was built over Hadrian's Gate … probably erected after the Bar Kochba Revolt when Jerusalem was renamed Aelia Capitolina (after Hadrian's Aelian family name). According to Dr. Rina Avner, who led the Antiquities Authority's excavation north of Damascus Gate, the relic from the Roman period is among the most important Latin inscriptions ever discovered in Jerusalem.

The inscription proves that the 10th Legion was stationed in Jerusalem between the two Jewish Revolts and that troops were on hand when Antinous and Hadrian visited.

“The [date] is a significant and tangible confirmation of the historical account regarding the presence of the 10th Legion in Jerusalem during the period between the two revolts, and possibly even the location of the legion’s military camp in the city, and of one of the reasons for the outbreak of the Bar-Kochba revolt several years later and the establishment of Aelia Capitolina,” she said. 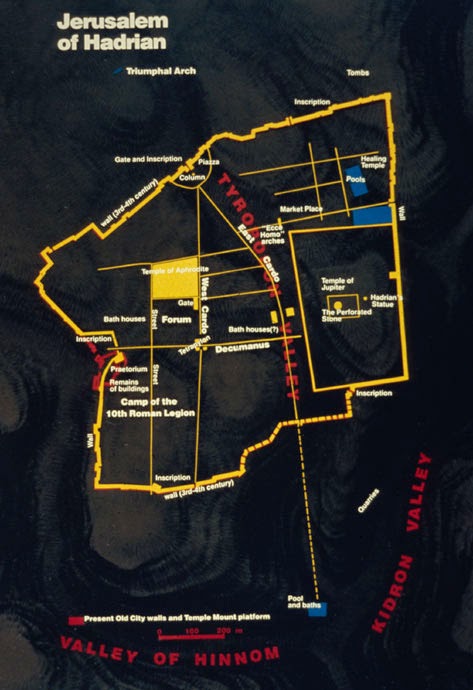 The English translation of the inscription is as follows: “To the Imperator Caesar Traianus Hadrianus Augustus, son of the deified Traianus Parthicus, grandson of the deified Nerva, high priest, invested with tribunician power for the 14th time, consul for the third time, father of the country (dedicated by) the 10th legion Fretensis Antoniniana.”

The Bar-Kochba revolt is ascribed to the reign of the Emperor Hadrian, who is remembered in Jewish history for having issued dictates imposing the persecution of Jews, which the sources referred to as the “Hadrianic decrees.”

The history of the Bar-Kochba revolt is known from, among other events, the works of the contemporary Roman historian Cassius Dio, who also mentions Hadrian’s visit to Jerusalem in the year 129/130 CE, within the framework of the emperor’s travels in the eastern empire.

But the inscription is the first proof of Cassius Dio's claim.

“This is apparently exactly what happened in Jerusalem,” said Avner. “The completion of the two parts of the text reveals an especially large inscription that is quite impressive. The inscription itself might have set in the top of a free-standing triumphal arch on the city’s northern boundary such the Arch of Titus in Rome.” 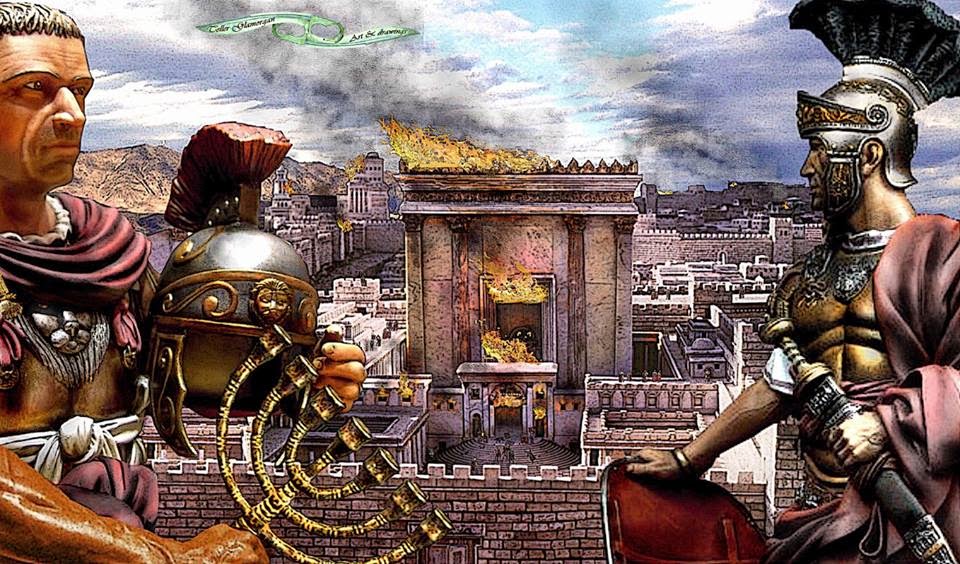 Jerusalem's fate after destruction of the Second Temple (70 CE), and prior to the Bar-Kochba revolt (132-136 CE), is one of the major issues in the history of the city and the Jewish people, she noted.

“We know from ancient writers and the inscriptions on coins that the new city, which Hadrian established, was granted the status of ‘colonia,’ that is a city whose citizens and gods are Roman, and its name was changed to Aelia Capitolina, or COLONIA AELIA CAPITOLINA in Latin,” Avner said.

“There is no doubt that the discovery of this inscription will contribute greatly to the long-standing question about the reasons that led to the outbreak of the Bar-Kochba revolt: Were the reasons for the rebellion the construction of Aelia Capitolina and the establishment of the pagan temple on the site of the Jewish Temple Mount; or conversely perhaps, these were the results of the revolt – that is, punitive action taken by Hadrian against those who rebelled against Roman rule?”