BRICKLAYER AND HIS DOG
MADE LASTING IMPRESSIONS IN ASIA MINOR 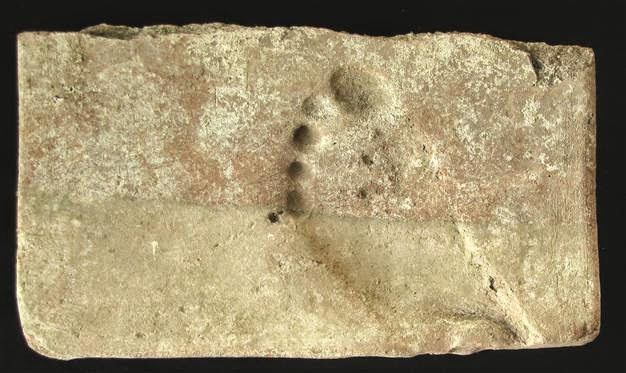 EXPERTS in Turkey have found the footprint of a laborer in the ancient homeland of Antinous who stepped onto a brick before it had dried completely ... 2,000 years ago.

And the laborer was accompanied by a dog ... which also immortalized its paw print for posterity.

Archaeological excavations in the Hellenistic city of Parion, located in the northwestern province of Çanakkale’s Biga district, revealed the startlingly intact print which is as pristine as when it was made.

The dig site is not far from the city of Claudiopolis (modern Bolu) where Antinous was born.

"There is a footprint of a person on a brick. The person lived here 2,000 years ago. Its size shows us that it is a normal footprint. Most probably a worker mistakenly put his foot on the brick," the head of excavations said.

"There is also a paw print next to this footprint. We believe that it belongs to the dog of this worker. These prints are interesting findings in terms of archaeological history," said Professor Vedat Keleş,  the head of the excavations being carried out by Samsun 19 Mayıs University Archaeology Department.

Judging by the size of the print, he says Ancient Romans were not necessarily smaller than 21st Century people, contrary to common belief that we are bigger because we are better nourished.

"The height of ancient Roman-era people is almost the same as the height of today's people," he added.

Excavations in the ancient city have been continuing in seven areas, including a southern necropolis, a theater, an odeon and a Roman bath.