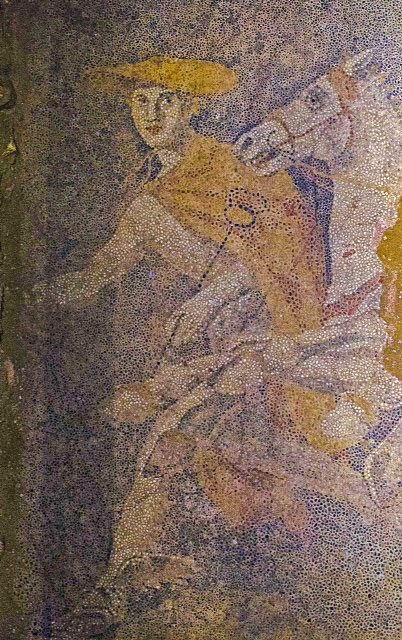 THIS breath-taking mosaic has been revealed at the mysterious large tomb at AMPHIPOLIS in Macedonia, Greece, spawning new speculation that someone very important must have been buried there.

The beautiful mosaic was discovered in the second chamber of the tomb, the site of the CARYATIDS discovery.

The colorful floor was laid with white, black, grey, blue, red and yellow pebbles and depicts a chariot in motion.

Hermes, the messenger of the gods, is pictured in front of the chariot.

"The central theme is a chariot in motion, pulled by two white horses and driven by a bearded man, crowned with a laurel wreath," the Greek Ministry of Culture said in a statement. 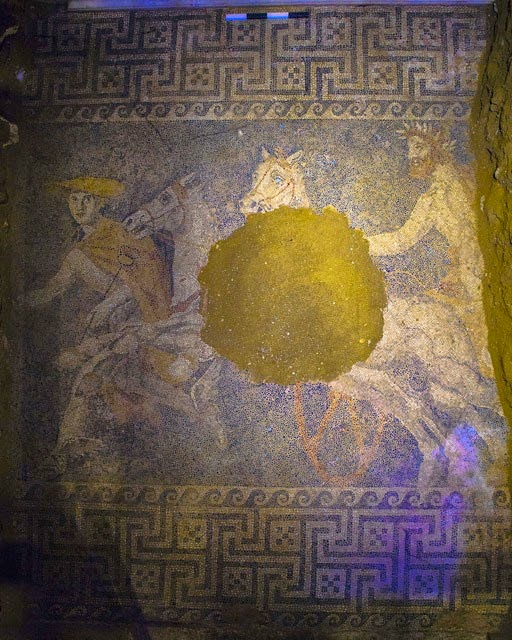 The mosaic showcases the artist’s ability to portray the figures, horses and colors in exquisite detail.

The stunning artwork, which has yet to be fully uncovered, spans the entire floor of the second chamber. It currently measures 4.5 meters in width and 3 meters in length.

The central scene is surrounded by a decorative frame, 0.60 meters in width, featuring a double meander, squares and a wave-curl design.

According to archaeologists, a section of the mosaic floor was destroyed in antiquity. The Amphipolis team was able to recover the loose pieces of the mosaic during the excavation process, however, and plans on being able to eventually piece the mosaic back together.

Greek prime minister is said he is almost certain it must be the LOST TOMB OF ALEXANDER. Alexander sailed from Amphipolis to Asia. However, it is almost certain that his tomb is located in Alexandria, since people such as Julius Caesar, Hadrian and Antinous are supposed to have visited his burial site there.

Posted by Hernestus at 7:28 PM