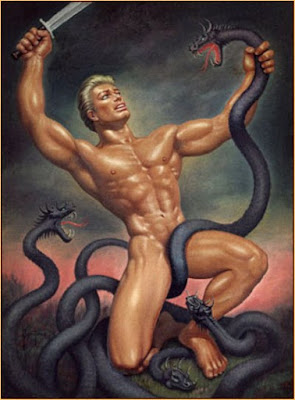 ON AUGUST 12th, we honor Hercules Invictus, the champion of homosexuality.

The Great God Hercules, defender of mankind against chaos, the son of Zeus, the strongest and mightiest man that has ever lived, was one of the first of the Greek gods to be worshipped by the Romans.

The Greeks of southern Italy introduced the Cult of Hercules at such an early date that the Romans were convinced that Hercules was indigenous. Indeed, he was admitted by Romulus into the sacred Pomeria, the spiritual protective wall of the city of Rome.

The cult of Hercules was centered at Tibur, where Hadrian built his magnificent Villa, and Hadrian is often compared to Hercules for his travels, his physical strength, courage, and his sexual prowess.

Hercules was driven mad by Hera and forced to murder his wife and children. In order to atone for his sin, he visited the oracle of Delphi and was instructed to submit to twelve labors.

Hercules accomplished them all, and many others including the release of Prometheus from bondage.

He was also a sexual champion and the number of his lovers is very long, and they include boys such as Abderus, Chonus, Haemon, Hylas, Iokastus, Iolaus, Nestor, Philoctetes, Polyphemus, Telamon, Abderus, Admetus, and Dryops.

Without question, Hercules was a champion of homosexuality, and a defender of mankind against the forces of evil.

For his benefit to mankind, he is venerated as a God and Protector of the Religion of Antinous.