DID ANTINOUS SEE THIS TEMPLE
RENOVATED BY HADRIAN IN BRIGHT COLORS? 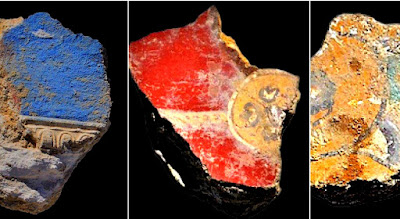 DID Antinous see this temple?

Archaeologists in Italy are amazed by the brilliant colors of frescoes which were reused in an ambitious renovation project by Emperor Hadrian during the time of Antinous.

"It's the first time that the ruins of a shrine painted with such a wide palette of colors in an incredibly well-preserved state ... and with such rich, elaborate decorations ... has been unearthed," said archaeologist Marco Giglio.

The discoveries were made a the ruins of a temple in Cupra Marittime, said Giglio, who is research project coordinator and a professor at the University of Naples L'Orientale. 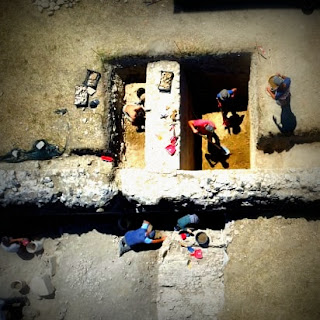 "Once we have cleaned and analyzed all the 100 fragments found and pieced them together, we hope it will give us a complete picture of what the temple once looked like."

The Cupra temple, built at the start of the first century AD, was the spiritual hub of a strategically and commercially important city that helped the Romans control the Adriatic coast and its maritime trading routes. Excavation began in July and is being led by the University of Naples L'Orientale and Cupra Marittima's town council, which oversees the archaeological park where the old city's ruins are situated.

Unusually, the newly discovered wall paintings appear to have been created in the so-called Third Pompeian (or "ornamental") style typically used to decorate rich households in Pompeii and Rome, rather than religious structures, according to Giglio. 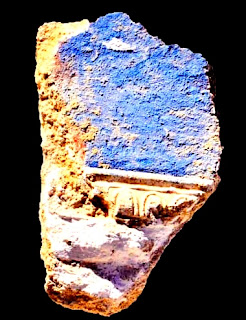 The ancient sanctuary is thought to have had a sky-blue ceiling, while the lower part of the temple's walls were painted yellow. Red, black and yellow squares were separated by images of candelabra and garlands, with green bands of color running horizontally along the walls.

"Recovering intact ancient wall paintings like these is very rare. Paint is hard to preserve across time due to humidity, and it's also very hard to dig out correctly during an excavation," said Ilaria Benetti, an archaeologist from Pisa and Livorno provinces' Superintendence of Archaeology, Fine Arts and Landscape in a phone interview.

"The incredible state of preservation and integrity of the frescoed parts, and the extremely rich color palette used -- particularly the bright sky-blue and pinkish-red -- stand out as quite exceptional when compared to the traditional red paint normally used in ancient times, thus suggesting it was a lavish shrine," added Benetti, who is a frescoes expert but was not directly involved in the excavation.

Giglio added: "The sky-blue color is very rare for ceilings, which leads us to believe it was meant to indicate the celestial vault and that the shrine was built to honor a goddess." 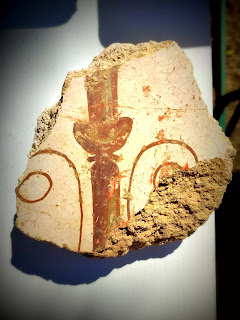 The temple underwent several radical changes after its foundation, making it harder for Gilgio's team to envision what it originally looked like.

In 127 AD, the Roman emperor Hadrian funded a complete overhaul of the shrine as he feared it might collapse due to structural damage caused by aging or natural disasters.

To reinforce the structure, Hadrian is thought to have had the painted walls chiseled off and covered in marble. This process pulverized the original colored sections but they were later used as a base for the new floors. "That's why the fragments recovered have been so well preserved, because their life was indeed short, roughly only a hundred years," said Giglio, noting that this detail supports the idea that Roman builders recycled materials. 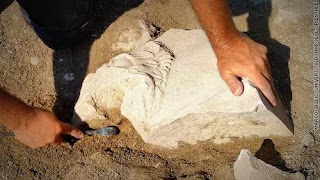 Hadrian then added nine-meter high columns with ornate capitals, semi columns and lion-headed roof dripstones, some parts of which have now been found. He also built two brick arches that still flank the temple site.

According to Giglio, Hadrian's pagan masterpiece was later crushed to pieces starting from the 7th century. The marbles and columns were knocked down to be used as building materials, while at the end of the 19th century the temple walls were demolished to make room for a since-abandoned rural house that still looms over the shrine's ruins.

With just one fifth of the temple site excavated thus far, the archaeologist said his team has had "just a taste" of what's to come.

"Who knows what other decorations, patterns and elements could come to light?" he said. "It would be great that what we will unearth will lead to understand exactly how a construction site worked back in ancient Roman times."