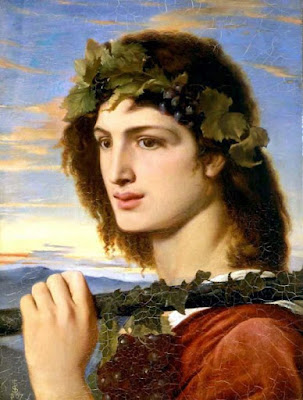 ON August 14th we honour Simeon Solomon, who died on this date in 1905, and who was one of the most famous and infamous pre-Raphaelite painters of the 19th Century.

He was an outcast in two regards: he was Jewish and he was homosexual.

The pre-Raphaelites rejected the industrial machine age in the mid-19th Century and sought to return the the artistic genius of the late Medieval and early Renaissance "before Raphael."

At the height of his fame, he was arrested in 1873 at a public lavatory on Oxford Street in the heart of London and thrown in jail. He was in and out of prison the rest of his life on similar public "indecency" convictions.

After his prosecutions he no longer exhibited, but achieved a degree of celebrity amongst those who shared his sensibilities, including Oscar Wilde, John Addington Symonds,Count Eric Stenbock, and Walter Pater, who all collected his works.