THE DEPARTURE FROM TIBUR
FOR THE VERY LAST TIME FOR ANTINOUS 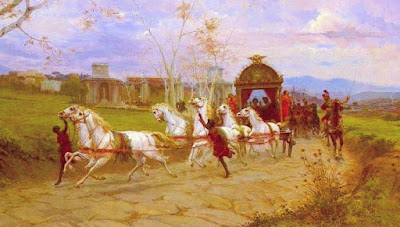 ON August 1st the three-year Sacred Calendar of the Temple of Antinous begins, known as the Peregrinatio ad Orientem, which follows the progress of Hadrian and Antinous on their fateful three-year Tour of the Eastern Provinces.

The inner circle of Hadrian departs from the Villa at Tibur with solemnity and with prayers to Mercury the god of travelers. (Painting above is "Departure From The Villa At Tivoli" by Eduardo Forti.)

The Villa at Tibur is regarded as the second most sacred city after Antinoopolis because it was here that Hadrian and Antinous lived together for most of their relationship, it was from here that Hadrian would later disseminate the religion of Antinous, and it is believed that the tomb of Antinous may be located in an unexcavated corner of the vast ruins.

As they depart, Antinous is the acknowledged favorite of Hadrian.

This is the last moment that Antinous spent in the West, and is observed in solemnity as the departure of Antinous from the repression of Rome to the loving embrace of Greece.

The fall of the ancient religion and the destruction of the Holy City of Antinoopolis are mourned, as the meaning of the departure is also the occasion where we remember the fall of his glorious religion, and the centuries of silence which have preceded our revival.