THE ACCESSION OF HADRIAN
AS EMPEROR OF ROME 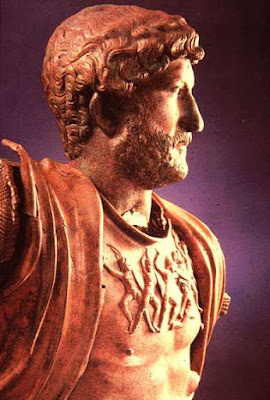 ON August 8th 117 AD, Trajan died amidst doubts as to who would be his successor ... paving the way for Hadrian to succeed him as emperor.

It would not be until August 11th that the situation would become clear and the Legions would proclaim Hadrian emperor.

Hadrian had been on tenterhooks for years wondering whether Trajan would formally adopt him as his heir.

If Trajan died without the issue of succession being settled, it could result in civil war — or at least in the assassination of Hadrian by some other ambitious man.

Then finally, while on campaign in Nikomedia, capital of Bithynia, Hadrian receives word that Trajan unexpectedly died on August 8th.

He learns that Trajan's "deathbed will" named him as the emperor's adopted son and successor.

It is believed that Trajan's wife, the Empress Plotina (who adored Hadrian), forged the will of her husband, naming Hadrian as successor.

Whatever happened, the Legions proclaimed Hadrian emperor on August 11th.

The support of the army insured the validity of our Emperor's claim, ushering in the Sacred and Golden Age of the Antonines, the dynasty of peaceful and wise emperors which would end with Marcus Aurelius.

Our own FLAMEN ANTINOALIS ANTONIUS SUBIA explains what this means to gay men everywhere:

"Hadrian became Emperor over Rome at the pinnacle of her glory. Her boundaries stretched farther than ever before; farther than they ever would again. Millions of people were subject to his authority. As Emperor, Hadrian first made peace with the Parthians, surrendering some of the land that Trajan had occupied, and then began the work of consolidating the Empire from the inside. We celebrate the Accession of Hadrian as the miracle that might never have been, without which Antinous would never have been known, and our religion would never have been born. Hadrian is Our Father, Our Emperor and Our Capitoline God, we recognize on this day that the beginning of his age is the beginning of our own."

On August 11th, please take a moment to remember the day on which Hadrian's long and heartfelt dreams and ambitions became reality and the path was paved for him to begin work on creating a civilization based on Hellenistic tolerance — and above-all his dream of founding the perfect religion based on love and beauty.

May the Divine Hadrian help us all achieve our heartfelt dreams and ambitions in this regard.