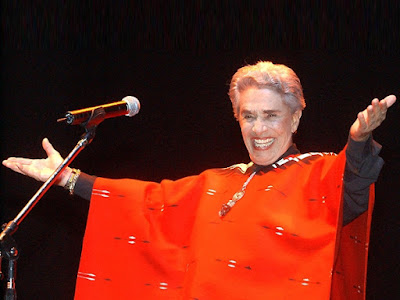 CHAVELA VARGAS, 17 April 1919 - 5 August 2012, the forceful lesbian songstress who was born in Costa Rica and rose to fame in Mexico, and influenced generations on both sides of the Atlantic, is a Saint of Antinous.

When she died in 2012 at age 93, she was especially known for her rendition of Mexican rancheras, but she is also recognized for her contribution to other genres of popular Latin American music.

Never one to hide her lesbianism, she has been an influential interpreter in America and Europe, muse to figures such as Pedro Almodóvar, hailed for her haunting performances, and called "la voz áspera de la ternura," the rough voice of tenderness.

FLAMEN ANTONIUS SUBIA speaks for millions of gays in the Spanish-speaking world when he says her passing is a saddening loss. He grew up with her music.

It wasn't until I was in my late teens that a friend pointed out that all her love songs are sung about women, I hadn't even noticed, I had just taken them at face value, you broke my heart songs, without really thinking about the context...that was when I really started to like Chavela Vargas...when it suddenly dawned on me that this dramatic, bellowing woman, who was such a favorite of my parents, was A LESBIAN!!!

As it turns out she was a hard-core lesbian, though never public about her sexuality, she never actually hid it...it was pretty much right there for everyone to see.  She drank heavily, carried a gun and wore a big red poncho...how can you not love a lesbian such as that?!  Eventually the drinking became too much and she dropped out of making music for a long, long time...only to return about 10 years ago, at 83 years of age with a new album...and it was during her return that I finally learned that, yes indeed, just as I suspected, she was in fact a Lesbian.  My favorite quote is when she said:

"I've never even been to bed with a man. Never. That's how pure I am; I have nothing to be ashamed of. My gods made me the way I am." - Chavela Vargas

Chavela Vargas is a blessed Saint of Antinous.