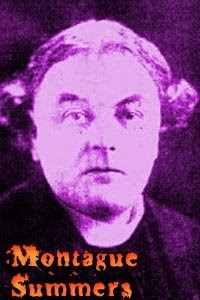 ON AUGUST 10th, the Religion of Antinous honors the Reverend Montague Summers, saint of Antinous, who was a very upfront and openly gay member of the  Sacred Band of Lover/Warriors at the turn of the last century and who published a book of Uranian poetry entitled Antinous.

Here is a splendid contemporary description of him:

"During the year 1927, the striking and somber figure of the Reverend Montague Summers in black soutane and cloak, with buckled shoes — à la Louis Quatorze — and shovel hat could often have been seen entering or leaving  the reading room of the British Museum, carrying a large black portfolio bearing on its side a white label, showing in blood-red capitals, the legend 'VAMPIRES'."

While everyone else in Late Victorian and Edwardian England was constrained by strictures of class and morals, Montague Summers thumbed his nose at all restrictions of any kind. Having studied theology to become an Anglican clergyman, he suddenly claimed he had received a visionary call to become a Roman Catholic priest. He donned self-styled priestly robes and called himself "Reverend Alphonsus Joseph-Mary Augustus Montague Summers" — when in fact he had not been ordained officially by anybody.

It was shocking enough in England to convert to Catholicism and become a priest. But to become a fake priest was even more scandalous. But there was more ....

All the while he was also seriously studying the Occult and became friends with the crowd of Occultists who hung out at Watkins Books just off Leicester Square in London's theatre district — still even today one of the "craftiest" places to see and be seen.

In the late 19th Century, Watkins was the only book shop in England (or perhaps in the world) which specialized in esoteric books and witchy things. It was frequented by Madame Blavatsky and Bram Stoker and Arthur E. Waite and Pamela Colman Smith and — of course — Aleister Crowley. Summers became friends with Crowley and they enjoyed playing off each other, claiming they were opposite "polarities" of magical craft.

When Crowley announced he was a modern-day wizard, Summers responded by announcing he was a modern-day Catholic witch hunter. He wrote his own Malleus Maleficarum which claimed to be an accurate account of witchcraft and of the methods necessary to combat it.

He also wrote a book on The History of Witchcraft and Demonology, saying:

"In the following pages I have endeavored to show the witch as she really was — an evil liver: a social pest and parasite: the devotee of a loathly and obscene creed: an adept at poisoning, blackmail, and other creeping crimes: a member of a powerful secret organization inimical to Church and State: a blasphemer in word and deed, swaying the villagers by terror and superstition: a charlatan and a quack sometimes: a bawd: an abortionist: the dark counselor of lewd court ladies and adulterous gallants: a minister to vice and inconceivable corruption, battening upon the filth and foulest passions of the age".

As with everything that Rev. Summers wrote, it is difficult to determine whether his intention was to condemn or to praise. He was so clearly fascinated by the Occult that one never knew quite whether he was "for it" or "against it."

There was no doubt, however, about his love of handsome youths. It was said that he had never been ordained because of rumours of improprieties with boys as a school teacher, teaching upper class English schoolboys the finer points of Latin.

Indeed, Summers was for a while part of the circle of the Uranian poets, who celebrated ancient Greco-Roman erastos/eromenos man-boy love. His first book, Antinous and Other Poems appeared in 1907 and was dedicated to male-male love.

He was fascinated by Classical male-male love, and by the lives of  the Catholic saints, especially Saint Catherine who was drawn and quartered and who lives on as the English teatime "Hot Cross Bun"  symbolizing the way Catherine was torn limb-from-limb into four gore-spewing pieces rather than give up her faith. Very tasty with tea and clotted cream.

Rev. Summers revelled in telling young boys that their favorite snack symbolized the brutal dismemberment of a lady of faith. All of it told alongside Latin grammar lessons and tales of vampires and werewolves.

After his books on witchcraft, he wrote authoritative books on vampires, including The Vampire: His Kith and Kin (1928) and The Vampire in Europe (1929), and later a definitive book on werewolves, The Werewolf (1933). The werewolf book influence a whole generation of movie-makers, especially the German writer Curt Siodmak who wrote the screenplay for the 1941 horror classic The Wolf Man starring Claude Rains and Lon Chaney Jr.

Nearly everything that you have seen in Hollywood werewolf movies (wolf bane, silver bullets, etc.) comes straight from Curt Siodmak's reading of Rev. Summers book back in the 1930s.

In the old Hollywood werewolf movies, when a character went to the bookshelf and pulled down a book on werewolves and turned to a page with a woodcut illustration of a man-wolf — that was a cinematic reference to the 1933 book by Rev. Summers which was in fact on the shelves of well-stocked scholarly libraries around the world.

Summers's work on the occult is notorious for his unusual and old-fashioned writing style, his display of erudition, and especially his undoubted belief in the reality of the subjects he treats.

He was also fascinated by 19th Century Gothic literature. The genre was best exemplified by Mary Shelley's Frankenstein early in the century and the genre came to a thrilling close at the end of the 19th Century with Bram Stoker's Dracula.

Uptight Victorian readers had read Gothic horror novels with a mixture of shock and delight and Summers recognized the art form of the Gothic novel as a symbol of a romantic backlash against urbanization and industrialization.

He knew that "horror" was here to stay as a part of popular culture — as indeed it is. Every book shop, every video/DVD store has a big "Horror" section.

He helped to make horror a serious study of academic research by writing The Gothic Quest: a History of the Gothic Novel (1938), A Gothic Bibliography (1940) and he published a collection of Gothic horror stories in The Supernatural Omnibus (1931) and Victorian Ghost Stories (1936).

Above all, Rev. Summers was very strange and eccentric. The Times of London called him "in every way a 'character' and in some sort a throwback to the Middle Ages". He was also unabashedly and openly homosexual in an age when others (such as St. Oscar Wilde) faced jail and ruination for being gay.

Summers was a member of the Order of Chaeronea, a secret society for gay men founded in 1897 by George Ives, which was named after the location of the battle where the Sacred Band of Thebes was finally annihilated in 338 BC. The Sacred Band consisted of 150 homosexual couples and the reason was that lovers would fight more fiercely and more cohesively at each other's sides than would heterosexual men who were "just buddies."

Rev. Summers is a Blessed Prophet of Homoeros and a Dedicant and Messenger of Antinous among the Aula Sancti Ecclesiae Antinoi (our list of saints).