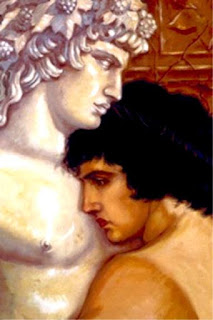 I want to tell you about my Beloved,

But you’re going to be disappointed.

In His dark blue hoodie, He waits by

The roaring ocean. “Seagulls are my favorites,”

He says, eating a cheap lobster roll. “No one appreciates

Sometimes, on the edges of my sight,

I glimpse His horns. Bull horns. I turn to see, wanting

To really behold that virile minotaur-like manliness I’m sure

He has beneath the soft twink exterior, but

It always vanishes the instant I turn. He laughs

And He’s not being rhetorical.

He wants me to answer.

In church they sing hymns of the beautiful one

Who died, who was lost, but who lives again, who goes

To prepare the way to Heaven for us, and I rock and say “Amen”

Over and over, for I know who they sing of: my Beloved sinking

Into the waves, slipping to the muck below, I cry for Him, lost,

And when the summer sun scorches my skin, when I cower and want to rush

Towards any cooler space or shaded shelter, wondering

When will the heat grow

Too much for any of our modern magic to save us, I remember

He is there, on that blazing bier, preparing the way for me.

And cools it, softens it,

And you too will know this

when you finally know the right way to look at the Sun.

To my brow, the waters of His drowning. He tells me “I’m not dead anymore you know”

But I know His hair isn’t fully dry just yet.

The priest says “Enter into the baptism of His death” and so I do,

And doing so I know far more than the priest does what his words mean.

My Beloved is fond of the smell of pine, and sometimes

In clouds of pine smoke I catch Him praying,

To Heavenly Father, but not the one I was taught about. The Father

Of lightning, the roaring storm smasher, who also

Sits in my cupboard, guarding the pantry. Domestic

My Beloved toois far more domestic than others say,

He does His share of chores. Minds the errands, doesn’t care

If themessiness of my children clutters up what he just cleaned.

And He prays to Mother, othertimes to Parent;

Beloved tells me of Them, the fearful mountain

That was whole before the Gods forced Them into a binary,

Before a conspiracy ripped off Their cock,

"The only true God in the end," He tells me.

"Even Father fears Their power"

Ancient priestesses, who have cast off their bloody genitals, undoing

The curse of Parent because these priestesses choose it, for them the knife

Their bodies into the bodies of their true selves, long before Christians

And their mutilating myth of two genders.

"I was not a priestess," the Beloved says, "but I remember them. That

is what freedom means. The choice to be, even when it bleeds."

He raises His cup of wine, pours out a libation to Father,

To Parent, and He is transfigured before me,

Teeth exposed. They say in church that the dead Lover becomes one with God, and so

My Beloved is one with Wild

I could be ripped apart,

To my throat full of dagger teeth,

But I know He won’t,

I’m the safest when most at His mercy,

drinking the dripping red from His lips.

He holds me and I should be afraid but I’m not.

Who is Lover and who is Beloved?

He laughs when I talk of my age. My nearness

"You realize I'm over a thousand years older than you,

"who is really the Daddy here?”

There is nothing greater, He reminds me

Than the One who Tops the whole Universe from the Bottom.

In His hoodie, His tight blue jeans, His tossled hair,

"Twink." But I know in His eyes endless

aeons of wisdom, I know the supernovas

shimmer there at the edges where He cries.

Beloved falls back on the couch and lazily scrolls

Disappearing into the background.

My Beloved is more than He appears.

It's why we get along so well."