HAPPY WORLD CAT DAY
IS YOUR HOME A CAT TEMPLE TOO? 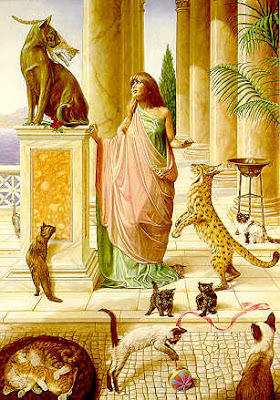 AUGUST 8th is World Cat Day ... so it's the purrr-fect day to look over the shoulders of archaeologists who have unearthed what appears to have been a major temple to the cat goddess Bastet in the royal quarter of ancient Alexandria.

The discovery represents the first trace of the true location of Alexandria's royal quarter, where the Ptolemies resided and which served as the home base for Roman visitors, such as Julius Caesar and Marcus Antonius, and later Emperor Hadrian and his lover Antinous in 130 AD.

The temple was in use for centuries. Presumably it was still in use when Hadrian and Antinous arrived in Alexandria. In later centuries Christians and Moslems used it as a "quarry" for stone to build new structures.

Its ruins remained buried until an archaeological team, doing routine excavations near the Roman theatre in Alexandria, stumbled onto the temple foundations and a cache of 600 Ptolemaic statues, primarily of cats and the goddess Bastet.

The temple was built by Queen Berenike, wife of Ptolemy III (246-222 BC). The temple compound is believed to measure 60 metres by 15 metres and extends underneath the present Ismail Fahmi Street in the heart of Alexandria.

The team, which comprises 18 skilled excavators and restorers, unearthed a large collection of statues depicting the cat goddess Bastet, the goddess of protection and motherhood, which confirms that the temple was dedicated to this popular Delta goddess.

The Bastet statues were unearthed in three different areas of the site  together with other limestone statues of unidentified women and children, according to Al Ahram newspaper. Clay pots as well as bronze and faience statues of various ancient Egyptian deities have also been uncovered, along with terracotta statues of the gods Harpocrates and Ptah.

The temple foundations definitely can be dated to the reign of Queen Berenike, making this the first Ptolemaic temple discovered in Alexandria to be dedicated to the goddess Bastet. It also indicates that the worship of the goddess Bastet continued in Egypt after the decline of the ancient Egyptian dynasties.

An inscribed base of a granite statue from the reign of Ptolemy IV was also unearthed. It bears an Ancient Greek inscription written in nine lines stating that the statue was commissioned by an official of high standing at the Ptolemaic court. Abdel-Maqsoud believes the inscription celebrates Egypt's victory over the Greeks during the Battle of Raphia in 217 BC.

Archaeologists also found a cluster of other ancient structures, including a Roman water cistern, a group of 14-metre-deep water wells, stone water channels, and the remains of a bath area, as well as a large number of clay pots and shards that can be dated as far back as the founding days of Alexandria in the 4th Century BC.

"This find is the first trace of the real location of Alexandria's royal quarter," the newspaper reported.