DID ANTINOUS SEE THIS GRAFFITI
FOUND AT VINDOLANDA ROMAN FORT? 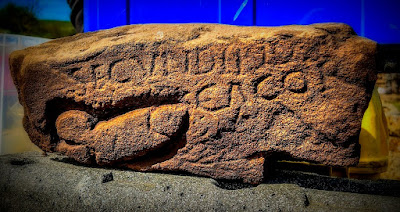 WE wonder if Antinous saw this explicit bit of graffiti if he accompanied his beloved emperor on a tour of Hadrian's Wall in northern Britain.

Vindolanda Roman Fort is famous for its huge cache of POSTCARDS and even for the world's oldest wooden TOILET SEAT and lots of graffiti has been found there, scrawled by soldiers into stone walls.

But nothing prepared archaeologists for the latest discovery: graffiti of a phallus with a vulgar graffiti insult carved into the rock around the image.

As well as the obvious explicit carved phallus, the face of the stone which measures 40cm wide by 15cm tall, is engraved with the words SECVNDINVS CACOR, an engraving which makes this graffiti a very personal insult.

Specialists in Roman epigraphy, Drs Alexander Meyer, Alex Mullen, and Roger Tomlin, recognised it as a mangled version of Secundinus cacator: "Secundinus, the shitter" with the image adding to the force of the written insult.

"The recovery of an inscription, a direct message from the past, is always a great event on a Roman excavation, but this one really raised our eyebrows when we deciphered the message on the stone," said Dr Andrew Birley, Director of Excavations and CEO of the Vindolanda Trust.

"It’s author clearly had a big problem with Secundinus and was confident enough to announce their thoughts publicly on a stone. I have no doubt that Secundinus would have been less than amused to see this when he was wandering around the site over 1,700 years ago."

The Roman phallus is often seen as a good luck charm or symbol of fertility, a positive symbol.

However, in this case the author has cleverly taken its meaning and subverted it to their own aims. Each letter has been carefully carved, which would have taken a while, leaving little doubt to the depth of feeling held.

This fabulous bit of social commentary from the ancient past will amuse visitors for many years to come.

It reminds us that while the Roman army could be extremely brutal, especially to the native population, they were not immune to hurling insults at each other. Centuries before printed papers or social media were available this would have been one of the best ways to get a lot of people noticing a point of view.

Posted by Hernestus at 8:22 PM