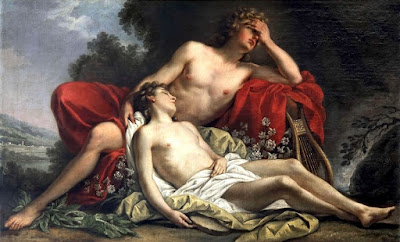 AT THE height of summer, during the cycle of the June Solstice, the Ancient Spartans noticed that the hyacinth flower began to wilt in the intense heat ... which reminded them of the untimely death of Hyacinthus, lover of Apollo.

The Ancient Spartans celebrated a three-day festival called the Hyacinthia, which began with mourning for Hyacinthus and ended with rejoicing for the majesty of Apollo.

This solar cycle is sacred to Antinous in the form of Apollo-Hyacinthus. ... Antinous being the beautiful flower boy Hyacinthus who dies, just as the sun begins to die, but who was raised from the dead and deified by the love of the God of Light, who forbade Dis Pater from taking his beloved boy to the place of Death....

Hyacinthus arose as Apollo, to live forever within the rays of the Unconquered Sun, an allegory of ourselves awakening to the light of reason, truth and sacred Homotheosis.

The beautiful boy from Sparta known as Hyacinthus, whose astonishing beauty and long, flowing blonde hair, was first noticed by Zephyrus, the God of the West Wind.

The moisture laden Zephyrus fell madly in love with the boy, and attempted many times to seduce Hyacinth, but every time the boy rejected the wind god whose breeze is the most lovely and most arousing.

It was then that Apollo noticed Hyacinthus and fell completely in love with him also, however when Apollo revealed his love to Hyacinth, he was not rejected, but his shining love was returned many fold. 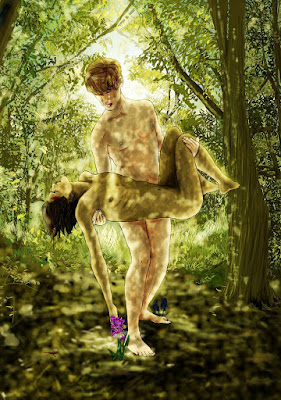 The two, who were like twins, whose long, blonde curls, rustled together in the jealous wind of Zephyrus, enjoined a passionate love affair, until one day, the sight of their happiness proved too much for Zephyrus to endure.

While Apollo and Hyacinthus were throwing the discus together, the wind god sent a gust of air, when Apollo threw the golden disk, causing it to fall directly on the perfect head of Hyacinthus who died instantly from the blow.

It was all an accident, and a tragedy, but Apollo was beside himself with grief, like Hadrian holding the body of his beloved Antinous.

The Sun God turned the blood that flowed through the soft curls into the flower that we call the Hyacinth.

The Death of Hyacinthus is the divine metaphor for the beauty and tragedy of life taken from the young in their full vigor, falling victim to the accidents of youth.

It is also a warning to those who would approach the majesty of the great god Apollo, who is rightfully called the Far-Shooter, and the falling of the golden discus is a sign that the powers of the sun at this time of the year, though at their greatest, are slowly fading. The disk strikes Hyacinth on the head and the days grow shorter.