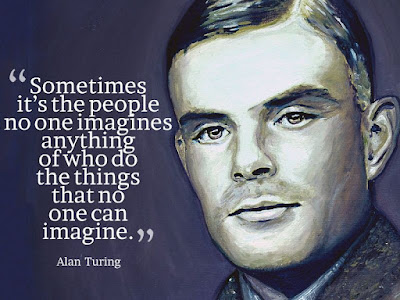 The namesake of the A.M. Turing Award, the "Nobel Prize of computing," Turing was castrated in 1952 as part of his punishment.
Having chosen chemical castration over a prison sentence, Turing killed himself on 7 June 1954.
He is credited with breaking the previously unbreakable Nazi code machine called "enigma" during World War II, which many say helped lead to an Allied victory over Germany's Adolf Hitler.
In 2014 he was officially pardoned posthumously by Queen Elizabeth II.

"A pardon from the queen is a fitting tribute to an exceptional man," British Justice Secretary Chris Grayling said in a statement. "Dr. Turing deserves to be remembered and recognized for his fantastic contribution to the war effort and his legacy to science."
Turing was just one of nearly 50,000 men who were sentenced under the 1885 Criminal Law Amendment Act that made homosexuality a crime.
Posted by Hernestus at 12:00 AM