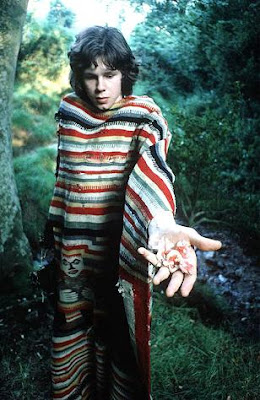 ON JUNE 19th the Religion of Antinous commemorates the birth of SAINT NICK DRAKE, the sexually ambivalent English singer who died under very mysterious, Antinous-like circumstances at a young age and who became an artistic icon for future generations of dreamers and artists.

Nicholas Rodney Drake was born on June 19th, 1948, to an upper middle class English family living in Burma. His father was an industrialist and there was never much question about Nick's financial future. Indeed, he would have been a wealthy middle-aged man today had he done nothing at all.

But Nick never ceased to wonder and worry about his spiritual future. Despite or perhaps precisely because of his admission to Cambridge University, Nick Drake was convinced that he should shun a financially certain future and pursue a future as a musician.

Nick Drake learned to play piano at an early age, and began to compose his own songs, which he would record on a reel-to-reel tape recorder he kept in the family drawing room in rural England.

In 1966 he spent some time in the South of France where he purportedly became acquainted with "the best sort of pot" and perhaps experimented with LSD — and possibly sex with both females and males.

Returning to England, he realized he was not suited to receive a degree from Cambridge University. Nick abruptly and shockingly (as far as his family was concerned) ended his studies at Cambridge nine months before graduation, and in autumn 1969 moved to London to concentrate on a career in music.

Nick signed to Island Records when he was 20 years old and released his debut album, Five Leaves Left, in 1969. By 1972, he had recorded his second album — Bryter Layter and part of his third, Pink Moon. Neither of the first two albums sold more than 5,000 copies on their initial release in Britain, much less abroad. He never made an American breakthrough, unlike other major British artists of the era.

Nick was devastated and depressed. His excruciating shyness to perform live or be interviewed further contributed to his lack of commercial success. Despite this, he was able to gather a loyal following.

He managed to complete his third album, Pink Moon, recorded in midnight sessions in the winter of 1971, immediately after which he withdrew from both live performance and recording, retreating to his parents' home in rural England. Once again, it did not sell well. He felt he was a failure. On November 25th, 1974, Nick Drake retired to his upstairs bedroom where he took a cocktail anti-depressants which killed him. He was found stretched over his bed next morning by his mother.

The Religion of Antinous honors Nick Drake as a prophet of Homoeros. He was a man who saw through the transparent barriers between sexuality to see the spiritual truth of reality. He was one of those many men who are never sure of their sexuality. But it is unimportant whether he was "gay" or not.

Nick Drake is a symbol of these sorts of dreamy and shy men who live existences of quiet despair. Nick Drake could play better riffs on the guitar than almost anybody of his generation. He had a beautiful voice. He was a gifted song-writer. He knew he had more   talent in his little finger than most well-paid artists would ever possess. But his career never took off. The big break never happened. Nobody appreciated him. He was broke and disillusioned.

His sister says she believes he took an overdose of anti-depressants   thinking he wanted it to either cure him or kill him, because he couldn't go on living in such despair of being an artistic failure. How many people in the economic meltdown of the early 21st Century don't feel the same despair? And yet ....

Nick Drake could scarcely have dreamt as he swallowed a handful of pills on a dreary November evening in his parents' house in the English Midlands that he would become a major recording star with fans around the world — 30 years after his death. His three albums now are cult chart-busters around the world.

When we remember Saint Nick Drake, we must remember too that Antinous is the patron of these sensitive souls who die untimely and tragic deaths at an early age. Antinous is the River Man who drowned in the Nile ....