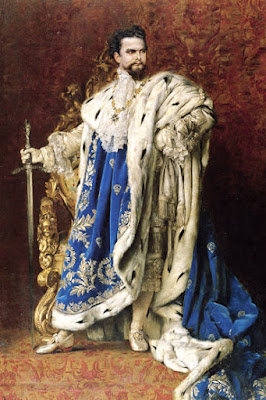 ON JUNE 13th the Religion of Antinous commemorates the life of King Ludwig II of Bavaria, who died on this date in 1886 under mysterious circumstances in an Alpine lake. As with Antinous, his death is shrouded in myth and legend and it will never be known whether he drowned accidentally or whether he was assassinated.

Born August 25, 1845, Ludwig was only 18 when he ascended to the throne of Bavaria in 1864. He was the  last truly sovereign monarch of that Alpine nation, which was engulfed by Prussia during his reign and very much against his wishes.

While the king of Prussia was planning a war against France, and various other crowned heads of Europe were scheming and conniving to commit war and bloodshed, "Mad" King Ludwig (as he was called) devoted the entire resources of his land to the performing and visual arts, commissioning operas by Richard Wagner and building the most astounding fairy-tale castles and palaces.

In the build-up to the Franco-German war, as troops were marching off to battle, Ludwig did not bother to see off his military forces. Instead, he went off on a jaunt to Switzerland to confer with Wagner on plans for a Wagnerian opera house in Munich. The opera house was never built, due to opposition from local critics. Instead, it was built at the Bavarian town of Bayreuth to the specifications of the composer, paid for by Ludwig personally.

Shockingly, in a staunchly Roman Catholic land, Ludwig never married and instead surrounded himself with handsome manservants, artists and architects.

Indeed, Ludwig is best known as a closeted gay man whose legacy is intertwined with the history of art and architecture, as he commissioned the construction of several extravagant fantasy castles (the most famous being Neuschwanstein below) and was a devoted patron of Wagner, who might never have finished his "Ring" cycle without Ludwig's ostentatiously generous support.

In an age of fiercely militaristic nationalism, Ludwig came under intense pressures from his advisers to abandon his artistic projects and to devote himself to empire-building. Feeling harassed and irritated by his ministers, he considered dismissing the entire cabinet and replacing them with fresh faces. The cabinet decided to act first.

Seeking a cause to depose Ludwig by constitutional means, the rebelling ministers decided on the rationale that he was mentally ill, and unable to rule.

Medical psychiatry was in its infancy, and a panel of "experts" assembled mostly anecdotal evidence of the king's "madness" to satisfy the ministers.

The list of "mad" behavior included his extreme shyness, his distaste for politics and state affairs, his complex and expensive flights of fancy (including moonlit picnics at which his young groomsmen were said to strip naked and dance), conversations with imaginary persons, sloppy and childish table manners and sending servants on lengthy and expensive expeditions to research architectural details in foreign lands.

He was deposed on June 9, 1886, and placed under house arrest at a castle on the shores of Lake Starnberg south of Munich where he was under the constant watchful eye of a psychiatrist.

On June 13, around 6:00 pm, Ludwig asked the psychiatrist to accompany him on a walk along the shore of Lake Starnberg. The doctor agreed, and told the guards not to follow them. The two men never returned. At 11:30 that night, searchers found both the king and his doctor dead, floating in the shallow water near the shore.

Ludwig was known to be a strong swimmer, the water was less than waist-deep where his body was found, and the official autopsy report indicated that no water was found in his lungs. Nonetheless, the official death certificate listed suicide by drowning. The death of the doctor was never explained.

Most other monarchs of his era have been forgotten, or else their names have been cursed by succeeding generations for laying the groundwork for the First World War. But Ludwig was only interested in laying the groundwork for grand architecture and enduring cultural masterpieces. His legacy of art and architecture ... and homoerotic romance ... continues to inspire and to enchant.