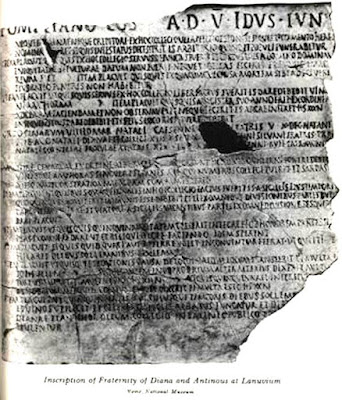 It was basically a Funeral organization, kind of like a Life Insurance Policy group, only with religious overtones.
What is interesting about this document is that it was open to slaves, freedmen, and Roman Citizens, with specific requirements of how much each person was required to contribute to the Funeral of a Member.
A proper Roman funeral was very expensive and certain ceremonies were believed to be indispensable if the dead person was going to find peace in the afterlife.
This group insured that if you were a member, that a Full Antinous themed Roman ceremony would be conducted on your behalf even if your family did not have the money to pay for the ceremony. 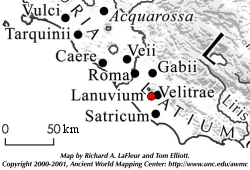 It's a beautiful document really, and represents how significant Antinous was during the zenith of his religion.
Another matter that makes this document important is that it is the only place where the Birthday of Antinous was recorded as 5 days before the Kalends of December ... or November 27th.
This inscription was posted at the doors of the now lost and forgotten Temple of Antinous of Lanuvium a completely insignificant town outside of Rome.
Which leads us to wonder how many other towns had Temples of Antinous ... and groups like this .... There is also a reference to the Fratria of Naples and the Adriatic League.
The Cult of Lanuvium were dedicated to Diana and Antinous, this is also one of the strongest connection that we can make historially to Diana as the Witch Goddess
Diana and Antinous are the same
male and female version of the same power essentially
The Lanuvium Text is extremely powerful...this is only an abbreviation of the first part:
LANUVIUM TEXT
"In the consulship of Lucius Ceionius Commodus
And Sextus Vettulenus Civica Pompeianus,
5 days before Ides of June.
At Lanuvium in the Temple of Antinous,
In which Lucius Caesennius Rufus, patron of the town,
Had ordered that a meeting be called through Lucius Pompeius
To us, Quinquennalis of the Cult of Diana and Antinous,
He promised that he would give from his liberality
The interest on One Sixth of 1,000 sestertii
Namely 400 sestertii on the birthday of Diana, the Ides of August
And 400 sestertii on the birthday of Antinoos, 5 days before Kalends of December
And he instructed the by-laws passed by us to be inscribed
On the inner side of the port of the temple of Antinoos
As recorded below.
In the consulships of Marcus Antonius Hiberus and Publius Mummius Sisenna
Kalends of January,
The Benevolent Society of Diana and Antinoos was constituted
Lucius Caesennius Rufus son of Lucius,
Of the Quirine tribe
Being for the third time sole magistrate and also patron…"
Posted by Hernestus at 12:00 AM