DISCOVER THE MYSTERIES OF ANTINOUS
IN YOUR DAILY LIFE NOW 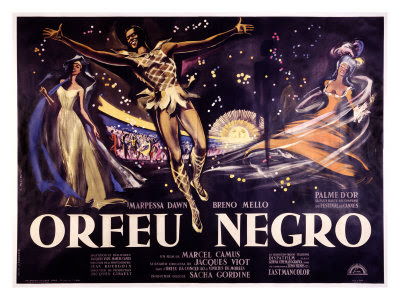 The Orphic Mysteries teach you to remember that you are the musician. You are the dancer. You are that which dies and enters the Underworld. You are also that which rises re-born bright and shining like the dawn sunrise ... today ... every day ... forever ... Homotheosis, Man-Godliness-Becoming-the-Same.

For a clue to the Antinous Mystery Teachings, just check out French director Marcel Camus' unforgettable film Orfeu Negro, which is a rendition of the Orphic Mysteries in the setting of 1950s Rio de Janeiro during Mardi Gras, or Carnival.

It is based on the Greek myth of Orpheus and Eurydice. Orfeu is a trolley-car motorman and gifted guitarist. Amid the joyous frenzy of Rio's Carnival, he becomes enthralled with the beautiful, doomed Eurydice.

Against a backdrop of Rio's favelas (shanty-town ghettos on the hills), the lovers sway in a never-ending rhythmic samba among the crowds. But Eurydice is stalked by a man in a skeleton costume.

Eventually, Orfeu finds her body in the morgue. In the house of the dead, voodoo rites are performed to bring her back to life. But impatient Orfeu looks upon her too soon ... and the spell is broken.

In the end, bearing her body in his arms, he falls to his death from a cliff. His guitar, standing in for the lyre of Orpheus, is taken up by one of the street urchins who follow him as a sort of Greek chorus.

The movie is the stuff of pure myth. The movie shows a Rio which no longer exists. In fact, it shows a Rio that never existed. The movie was based on a highly political stage play which satirically condemned the poverty of the favelas.

When the movie came out, Brazilians criticized it for portraying a Frenchman's romanticized TechniColor tourist vision of Rio.

That's what myths are about. Myths don't tell the plain old every-day truth that we see on the streets. Myths tell Sacred Truths that exist within our hearts and our souls.

Hadrian and Antinous had both been initiated into the Orphic Mysteries. That is the darker aspect ... the Antinous Mystery Teaching ... which was brought to the screen in Orfeu Negro. Mardi Gras (Carnival) ultimately is a Masque of Love and Death.

The frivolities are fleeting. Death will catch up with each of us. But a few mortals are privileged ... like Hadrian and Antinous ... to have been initiated into the Mysteries which enable a mortal to cheat death. And that is why we put on gay costumes and dance until we drop.

But, like Orpheus in the Underworld, poor grieving Hadrian must have known as we wept over his lost boy that the Mysteries not only offer a promise of advantages in the afterlife. The Mysteries of Antinous are lived on a daily basis.

We face a dark demon every day, if not several dark and deathly demons. Physical death is only one of those demons. There are many other forms of death, and the Mysteries of Antinous help us to overcome them on a daily basis.

Bringing Light out of Darkness is a spiritual miracle each of us faces every day. Rejuvenating our spiritual life out of the setbacks and trials of mortality is a task we face every day of our lives, and not just at the hour of our death.

The Afterlife is Now! And THAT is the ultimate Mystery Teaching. The Mysteries of Antinous are not about the Afterlife. They are about your Spiritual Life on an everyday basis.

That's why we dance and sing till we drop ... and never look back! When we dance the Masque of Love and Death, then our lives become imbued with the stuff Sacred Myths are made of ....