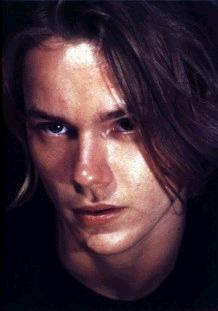 IN the early morning hours of Halloween day in 1993, River Phoenix died outside the Viper Room on Sunset Blvd.

He had ingested a fatal combination of alcohol, marijuana, cold medicine, a component of speed, heroin and valium. He was 23 years old.

His Dionysian indulgence caused him to collapse, convulse and then suffer cardiac arrest within a matter of moments.

He was dead when he arrived at Cedars Sinai Hospital only some 45 minutes after taking his heroin.

He was one of the most beautiful people that the world has ever known, an Adonis of our time, an amazing actor and musician, whose films will forever immortalize his memory.

One of his last roles was as a gay, drug-addict, prostitute in My Own Private Idaho, and it is said that his work on this film had such a profound effect on his soul that he was never again free from it.

He had not only turned to the use of heavy drugs, which he had before scorned, but he is also rumored to have taken up homosexuality, which he did not deny.

Indeed the sensitivity and depth that he brought to the tortured prostitute, searching for love, is an intimation of the inner beauty and darkness of understanding that River Phoenix possessed.

He had only just been chosen to play the role of the poet Arthur Rimbaud, another Saint of Antinous.

For his achievements in the cinema, for the abandonment of letting the dark god take over his life, and for the sorrowful tragedy of his death, which he embraced fully, almost prophetically, we name the spirit of River Phoenix among the blessed Saints of Antinous, because he was a living Dionysus, and because his final day on earth was the day that the Holy City of Antinoopolis was founded.

It is fitting that such a beautiful creature as St. River Phoenix is the first Saint of the Ecclesiastical Year.