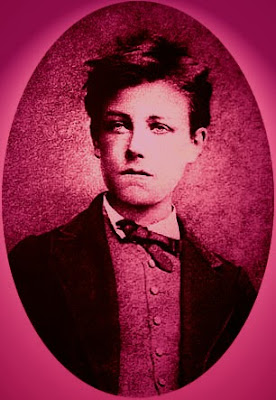 ON November 10th the Religion of Antinous honors St. Arthur Rimbaud, the free-spirited French poet whose openly gay lifestyle shocked even the most avant garde artists of London and Paris in the late 19th Century.

On this day, in 1891, the poet Arthur Rimbaud, Saint of Antinous, died of cancer just three months short of his 37th birthday. Despite his early death, he was already an acclaimed and highly controversial literary figure.

In his youth, Rimbaud had been what we would nowadays call a twink. A schoolboy friend said he was prettier than any of the girls and that he had "the most beautiful pale blue eyes" he had ever seen.

Raised by a staunchly Catholic single mother in isolation in the country, Rimbaud ran away to Paris at age 16 with no money but with a prodigious talent for poetry — he had already published a couple of highly praised poems.

In Paris, Rimbaud's behavior became outwardly provocative. The mild-mannered country boy started drinking, speaking rudely and writing scatological poems, stealing books from local shops, and instead of his previous neat appearance and in defiance of short-hair fashions, he began to wear his hair rebelliously long.

At the same time he wrote to an old school teacher of his who had encouraged his poetic talents, telling him about his method for attaining poetical transcendence or visionary power through a "long, intimidating, immense and rational derangement of all the senses. The sufferings are enormous, but one must be strong, be born a poet, and I have recognized myself as a poet."

Still a teenager, he was friends with radical Communists in Paris known as the Communards (hence the name of the '80s pop group) and he even wrote a poem about being sodomized by drunken Communard paramilitary men entitled "Le Coeur Supplicié" (The Tortured Heart).

He solicited the friendship of the established poet Paul Verlaine by audaciously writing a love letter to him and enclosing two hotly sexy poems, including the hypnotic, gradually shocking "Le Dormeur du Val" (The Sleeper of the Vale), in which the forces of Nature more or less rape a sleeping soldier.

Verlaine, who was intrigued by Rimbaud, sent a reply that stated, "Come, dear great soul. We await you; we desire you," along with a one-way ticket to Paris.

Verlaine was so smitten with the 17-year-old Rimbaud, that he abandoned his heavily pregnant 17-year-old wife and took up living with Rimbaud instead. Verlaine quit his job to become what he called "a full-time professional drunk" At left is a caricature of Rimbaud that Verlaine lovingly sketched about that time.

All of Paris was shocked by their behavior which, even among avant-garde artists, was considered scandalous.

The two of them fled to London, where they lived the life of starving artists. Rimbaud spent most of his time in the Reading Room of the British Museum for the simple reason that "heating, lighting, pens and ink were free", he later said.

Verlaine and Rimbaud had a volatile on-again, off-again relationship punctuated by drunken bitch fights and which climaxed with Verlaine firing a gunshot at Rimbaud which resulted in a wrist wound.

In his 20s and early 30s, Rimbaud was a vagabond poet who traveled the world, mostly on foot, doing odd jobs and writing poems. There is a marble plaque on the island of Java commemorating his short visit there as a soldier in the Dutch Colonial Army — he decided the military life was not for him and deserted almost immediately upon arrival there and returned to Europe.

He was living on the Horn of Africa with an Ethiopian mistress (he had had several lovers of both sexes, basically one in every port) when his health began to deteriorate due to what would later be diagnosed as cancer — alas, the diagnosis would be made too late to save his life.

He was 17 years old when he wrote the poem The Drunken Boat:

"..Lighter than a cork, I danced on the waves which men call eternal rollers of victims, for ten nights, without once missing the foolish eye of the harbor lights! Sweeter than the flesh of sour apples to children, the green water penetrated my pinewood hull and washed me clean of the bluish wine-stains and the splashes of vomit, carrying away both rudder and anchor. And from that time on I bathed in the Poem of the Sea, star-infused and churned into milk, devouring the green azures; where, entranced and pallid, a dreaming drowned man sometimes goes down; where, suddenly dyeing the bluenesses- deliriums and slow rhythms under the gleams of the daylight, stronger than alcohol, vaster than music-ferment the bitter redness of love."

We dedicate this poem and the course of the free and disordered life  of St. Arthur Rimbaud to the period of 72 Archons, and our difficult passage towards godliness.