THE APHRODISIAC ORCHIDS
OF ANTINOUS THE GAY GOD 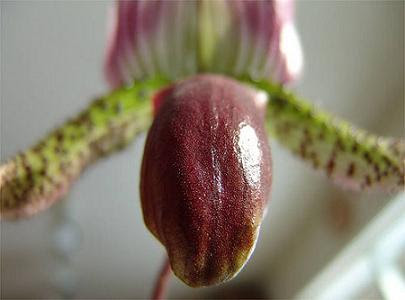 ORCHIDS are perhaps the most appropriate flowers for festivities on the Birthday of Antinous, which is November 27 since his homeland of Bithynia is renowned for its wild forest orchids.

Orchids take their name from the Greek word "orchis" which means "little boy's testes" for the scrotal shape of the bulbs and blossoms.

Antinous especially would have loved Bithynian wild mountain orchids -- because the plant's tubers are ground to make a flour which is used in all sorts of dessert sweets. It is called "salep" and is used in a syrupy drink which was very popular throughout the Mideast and Europe until its popularity was overtaken by coffee.

In England, it was called "saloop" and was THE thing to drink before tea was imported from India.

These Bithynian orchid bulbs were incredibly popular in Ancient Rome, where they were ground to make sweet drinks which were believed to be aphrodisiacs (coming from the "testes" orchid) and which had names like "satyrion" and "priapiscus".

Paracelsus, the alchemist/chemist, wrote, "Behold the Satyrion root! Is it not formed like the male privy parts? Accordingly, magic discovered it and revealed that it can restore a man's virility and passion!"

Now, for the first time, a careful study of ancient artifacts in Italy has proven that the Romans were not only crazy about consuming orchids but also about showing them in their art.

Botanist Giulia Caneva of the University of Rome (Roma Tre) has assembled a database of Italian artifacts, including paintings, textiles, and stone carvings of subjects including vegetation. Then, the team began the painstaking process of trying to identify the real plants the artists had copied.

One surprise was that depictions of Italian orchids—there are about 100 species in all—showed up much earlier than expected. Although scholars had spotted the flowers in paintings from the 1400s, Caneva's team discovered that stone carvers were reproducing orchids as early as 46 BC, when Julius Caesar erected the Temple of Venus Genetrix in Rome.

And at least three orchids appear among dozens of other plants on the Ara Pacis, a massive stone altar erected by the emperor Augustus in 9 BC, Caneva and colleagues reported last week in the Journal of Cultural Heritage.

But orchids and other plants begin to fade from public art as Christianity began to gain influence in the 3rd and 4th centuries, she notes.

"My idea is that they are eliminating pagan symbols, and [those] that are related to sexuality," she says. With the arrival of the Renaissance, however, orchids blossom anew in art, "but this time mostly as a symbol of beauty and elegance."