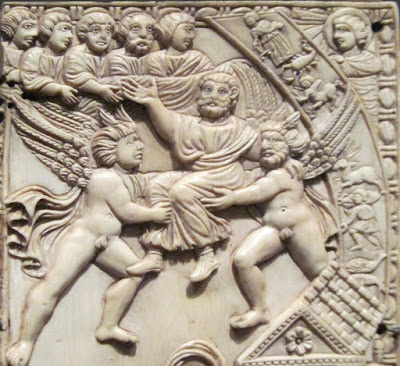 WE are proud to consecrate Quintus Aurelius Symmachus as a Venerable Saint of Antinous for his unyielding efforts to uphold the Religion of Antinous in the face of Christian opposition.

Symmachus sought to preserve the traditional religions of Rome at a time when the aristocracy was converting to Christianity, and led an unsuccessful delegation of protest against Gratian, when he ordered the Altar of Victory removed from the curia, the principal meeting place of the Roman Senate in the Forum Romanum.

Two years later he made a famous appeal to Gratian's successor, Valentinian II, in a dispatch that was rebutted by Ambrose, the bishop of Milan.

Symmachus's career was temporarily derailed when he supported the short-lived usurper Magnus Maximus, but he was rehabilitated and three years later appointed consul.

Much of his writing has survived: nine books of letters, a collection of Relationes or official dispatches, and fragments of various orations.

In an age when almost all other Roman Nobility were turning away from our ancient Religion, this gentleman stood strong and faithful and was a voice of dissent against the tidal wave of Christianity that was enveloping the Roman world.  This was the time when the Ancient Religion of Antinous was finally suppressed and destroyed.  We can be sure that this Great Noble Roman was one of the last champions and defenders of our God.

The portrait above shows the Apotheosis of Symmachus ... a relief depicting Symmachus being carried up to the realm of the gods by two divine figures as though he were being deified.  The Zodiac figures may indicate that his Deification took place around the Winter Solstice.