MARGUERITE YOURCENAR SHOWS YOU
HOW TO PRONOUNCE THE NAME 'ANTINOUS' 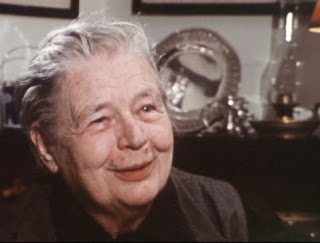 IN a rare interview with our beloved Marguerite Yourcenar, author of the landmark classic historical novel MÉMOIRES D'HADRIEN (Memoirs of Hadrian), notice how she pronounces the name "Antinous."

CLICK HERE for the interview that was done for French television in 1979.

You will hear his name spoken correctly in the VIDEO when she says that "Hadrian was the only man to raise a cult for a male lover for a boyfriend for whom he was preoccupied with creating the greatest multitude of portraits in antiquity of any other person than of ANTINOOS!"

She pronounces it "On-Dthee-Noh-Oows" which is the Greco-Latin way. And according to the glyphs on the Obelisk of Antinous, it is the correct pronunciation.

In English it is usually pronounced "an-TINN-oh-us" which cannot be how he called himself.

Flamen Antonius Subia, who is from El Paso, explains:

"Latin is only straight-forward for Latinos...and by that I do not mean only for Hispanics, but for all Latinos...Anglo-Saxons pronounce everything in their Germanic accent...all the vowels and some of the consonants are usually wrong.

"I feel sweetly vindicated and comforted by hearing that the Grand Lady herself says his name the same way that I say it...the way I knew that it should be pronounced...