ANTINOUS ENTERED ALEXANDRIA
WITH HADRIAN ON THIS DAY IN 130 AD

ANTINOUS entered Alexandria on August 1st of the Year 130, ushering in the climactic final weeks of His brief life.

Alexandrians turned out, of course, to see Emperor Hadrian and his splendid entourage. But as no emperor had ever had such a high-profile boyfriend before, everyone wanted a glimpse of the fabled Antinous, "the emperor's favorite."

Alexandria was a teeming city of many cultures and rival factions. Christians and Jews waged bloody street battles, and the snooty Greco-Egyptian social elite looked down on the upstart Romans, gossiping viciously behind their backs, albeit in stage whispers. 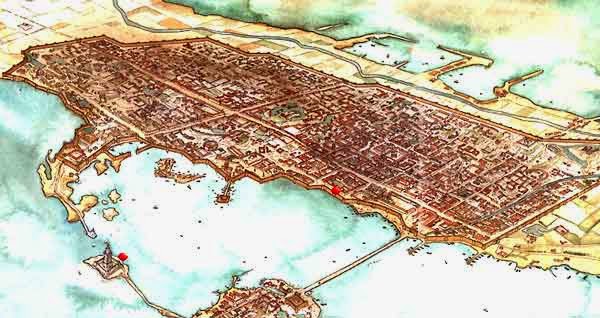 Within a few short weeks Antinous would be dead. And shortly after that, He would be a God.

But on August 1st all of that was undreamt-of, and the Imperial entourage arrived in the blistering heat after crossing the Sinai Desert and receiving something of a lacklustre welcome from Egyptians in the Nile Delta.

In the midst of a great drought, the Egyptians were starving. And that meant that the Empire was starving, since Egypt was the breadbasket of the Empire.

The Egyptians were looking to Hadrian — as their pharaoh and a living god — to provide them with a miracle. Thus, Hadrian and Antinous arrived in Alexandria amidst political and religious strife and under tremendous pressure for decisive action on the drought crisis.

"The people of the largest city in the Empire greeted Hadrian as Pharaoh and God in public celebrations. The Jewish and Christian community, as in Antioch, was not welcoming, being openly scornful of the divine honors lavished upon a man whom they considered immoral, due to the presence of Antinous.

"Alexandria was a city of diverse religious expression, it was also the home of the Museum and the restored library where philosophers met to study, discuss, and debate the wide rage of philosophy.

"This difficult period spent in Alexandria is reverenced as the period in which the Gnostic Fathers came in contact with the ruler who had given them the freedom to resist Orthodoxy and set in motion their revolutionary doctrines, which would one day undo Christianity.

"The anxiety of the recent stay in Jerusalem was alleviated in the Hellenic-Ptolemaic Alexandria, a city of admixture, wisdom and magic. The god of Alexandria is Serapis, who is a fusion of Zeus, Hades, Helios and Dionysus, with Osiris and the Apis Bull.

"The name of the Alexandrian god is from the Egyptian Osar-hapis. Hadrian was so moved by the religion of Serapis that he modeled the structures of the Villa known as the Canopus after the Temple of Serapis, which are believed to be an allegory of the Nile, Antinoopolis and the deification of Antinous. 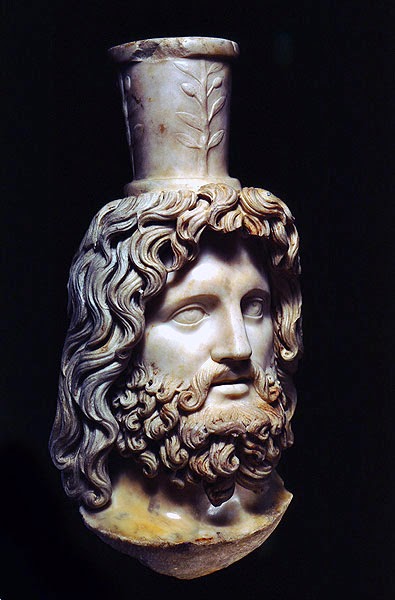 "The god Serapis is the guardian of the freedom and expression of Alexandria, the devotion to knowledge, secret and scientific, which the library held.

"Serapis prepares Antinous for his journey up the Nile and cleanses the newly forming god of the taint of condemnation heaped upon him by the Jews and Christians.

"As the sacred Star of Antinous nears its zenith in the night sky, Serapis unites Antinous with the immortal spirit of Alexander the God and his devoted Hepheistion."

Within a few weeks Antinous would be dead. Shortly thereafter He would become a God.

The following July/August, the Nile Inundation would be bountiful for the first time in years — the first recorded miracle of the Blessed Boy.

His renown would spread and he would gain a reputation as a God of Love and Beauty and Healing Magic.