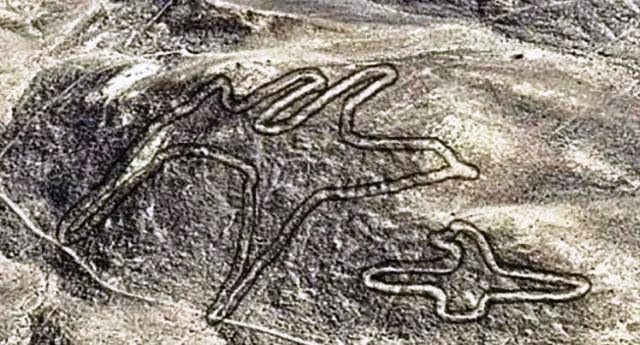 HITHERTO undiscovered Nazca geoglyphs have been exposed after severe winds and sandstorms swept through the Valley of El Ingenio in Peru last week.

According to a news release in El Comercio, winds reaching up to 100 km (60 miles) per hour uncovered several Nazca lines and images that are estimated to be around 2,000 years old.

The geoglyphs include images of a snake, a bird, a serpent-like wavy line, and a llama or camel-like quadruped. The images are indicative of the ancient Nazca culture, which flourished in Perus between 200 BC and 600 AD.

These Nazca geoglyphs were discovered by researcher and pilot Eduardo Herran Gomez de la Torre during a flight last week over the Nazca desert.

The images are easily detectable from the sky, as the picture of the snake covers over 60 meters of land by itself. Together, the Nazca lines canvas an area of about 280 square miles.

To this day, Nazca lines remain amongst history’s greatest mysteries, due to their massive size and vague purpose. Some archaeologists believe that these images, which are largely comprised of animal drawings, were once used for astronomical rituals.

UNESCO declared the Nazca desert a World Heritage Site in 1994, describing these ancient etchings as "a unique and magnificent artistic achievement that is unrivalled in its dimensions and diversity anywhere in the prehistoric world."

Ruben Garcia Soto, the director of the Department of Archaeology and Property Management of Decentralized Heritage Culture of Ica, told El Comercio that this new discovery is "a valuable contribution to the knowledge of ancient Nazca."