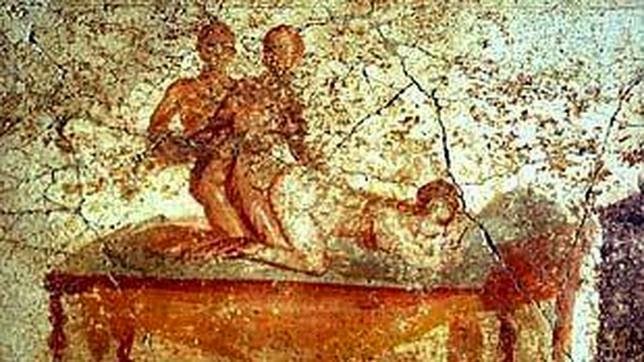 THEY wanted to enact a fantasy said to be very much in fashion in Pompeii: having sex in the ancient city’s red light district.

When the three, aged between 23 and 27, climbed over the gate of Pompeii in the middle of the night, they had just one goal in mind: to revive the original purpose of what has been described as the ancient city’s raunchiest location: the Suburban Baths, Il Mattino reported.

The communal baths, which were popular with rich Roman merchants, are decorated with some of the site’s most explicit sex scenes, including those depicting group sex.

Researchers say that the pictures may have indicated the services offered by prostitutes before the city was wiped out by Mount Vesuvius in 79 AD.

"It's ridiculous and vulgar, but young people are fascinated by this and sometimes try to play this game," Giuseppe Galano, a tour guide at Visit Pompeii, told The Local.

"They don’t understand the cultural value of the frescoes at all," he said.
Galano added that there have also been some other cases of couples using the site to "get intimate".

The three were immediately escorted to the police station, where they were charged with trespassing.

But they showed no sign of regret or embarassment, reportedly saying they planned to go back to Pompeii live out their fantasy again.

Meanwhile, another Frenchman was caught behaving badly in Pompeii last week after trying to STEAL RELICS from the ruins.