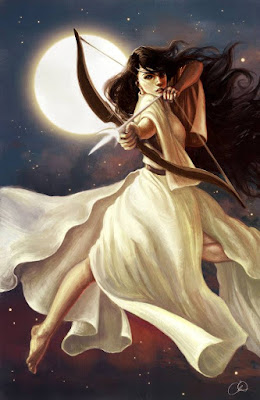 TONIGHT, February 7th,  is one of the festivals of Diana goddess of the Moon and hunting in her guise as lunar deity Selene.
She is goddess of wild places and wild animals and the protector of young women, pregnant women and those giving birth.
Diana is the twin sister of Apollo.
As Antinous is often assimilated to Apollo, he therefore substitutes as the twin of Diana, though he can often be viewed as her male double, so that Antinous is Diana.
Antinous and Diana are both hunters, and moon deities, and they are also gods of magic and darkness.
Diana is often compared to Hecate, the supreme goddess of Theurgian magicians, who rose to prominence during the reign of Marcus Aurelius.
Antinous therefore is the male equivalent of Hecate.

ANTONIUS SUBIA says: "We pray to Diana to guide us in our hunt and to illuminate our nights with the silver light of her sublime power. We recognize that the Moon of Diana is the Moon of Antinous."
Posted by Hernestus at 12:00 AM