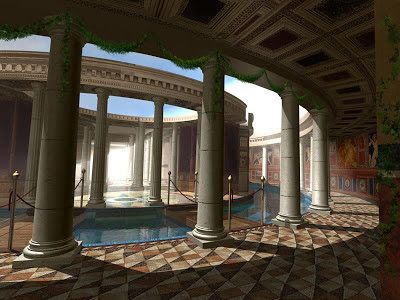 Archaeologists have discovered the spectacular room at Hadrian's Villa where Emperor Hadrian and Antinous had power breakfasts surrounded by the Imperial coterie of courtiers, Senators and foreign dignitaries.

From the moment he got up in the morning Hadrian was on display to his courtiers, conveying an impression of grandeur through the carefully crafted rooms. His villa at Tivoli, 20 miles east of Rome, sprawled over 300 acres at the foot of the Apennines.

Experts believe that Hadrian would begin his days at the villa by taking breakfast on a marble platform in a flooded, semi circular room. 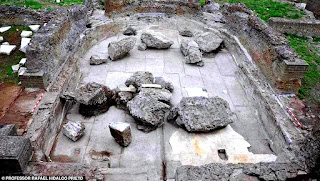 Two fountains would have spurted water into the air behind him and Antinous, while light poured in through a vast window, casting imposing silhouettes of the pair to those so favoured to be allowed to see them.

"It was a quasi-theatrical spectacle," Villa Adriana director and Italian art historian Andrea Bruciati told The Times when the site was reopened to the public after lockdown restrictions were eased.

According to the expert, the platform would have connected to four bedchambers, each with a latrine bedecked with marble panels and precious stones.

'The villa was a machine that served to represent the emperor’s divinity. It was almost futuristic,' Dr Bruciati continued.

'Politicians could learn from him today,' he concluded. 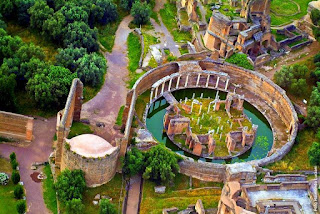 Archaeologists identified the setting within the Villa Adriana, a sprawling 200-acre complex at Tivoli that was initially built for the emperor as a retreat from the hustle and bustle of Rome in around 120 AD.

By the year 128 AD, however, Hadrian began governing the empire directly from the villa, which would have played host to a large court and numerous visiting guests and bureaucrats.

An avid scholar of art and history, Hadrian played a key role in the design of the complex, with buildings named for and reflecting the styles of places he had once visited on his travels.

It therefore merged both Roman and ancient Greek architecture, and was similarly decorated with Greek figures, such as copies of the Caryatids seen at the Acropolis and statues known as Poikilos.

It even had an Egyptian-themed area ... Canopus, named for the city in which Hadrian's lover, Antinous, drowned ... with a long, rectangular reflecting pool to represent the Nile in which the young man met his end.

Each of the carefully crafted rooms and structures would have established the Emperor's taste and power ... reinforcing his status among his watching courtiers.