CELEBRATING AN ANTINOUS FACEBOOK PAGE
FOR ANTINOMANIACS LIVING IN BRITAIN 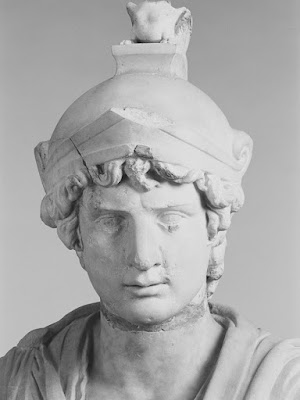 WE are proud to celebrate the second anniversary of British Antinous Priest Martinus Campbell's Facebook page devoted to Antinous.

Below is one of his exclusive, first-person posts, and his followers are continually impressed with the scope of Martinus's knowledge and the depth of his devotion to Antinous. CLICK HERE to follow all of his posts! 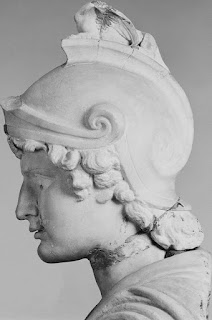 Today I am showing you a UK based bust of Antinous about which I know some history. You can find it at the magnificent Hampton Court Palace, just West of London - the favoured home of King Henry the VIII and his 7 unfortunate wives.

Antinous is depicted wearing an ‘Attic’ helmet (meaning inspired by ancient Greek designs). Experts classify the attic, in this case, by the diadem-shaped band and the short neck guard. It is surmounted by a very worn sphinx resting on a wedge-shaped base. 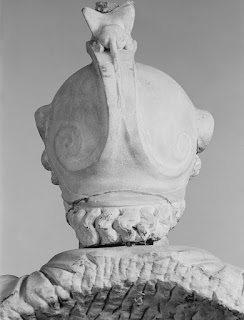 The sphynx’s tail divides in two at the back and forms two scrolls on the sides of the helmet.

It is a style that Hadrian may have designed himself.

During his reign, Charles I put together an important collection of Roman antiquities.

It is believed that this portrait bust of Antinous was acquired by Charles I around 1625 and that it was one of the marble portraits from the Gonzaga collection in Mantua, Italy, that were sold to Charles I by Duke Vincenzo II.

It is remarkable that it has survived in the Royal collection. The English Civil War (1642–1651) resulted in King Charles being beheaded and the aristocracy being  replaced by the new 'Commonwealth' republic, ruled by Oliver Cromwell.

This lasted for 5 years until Cromwell died and young King Charles II was given the throne. Like most revolutions the great houses of the exiled or executed elite were raided and looted.

Somehow this Antinous survived. Hadrian protected it. In reality it was probably too heavy to carry!