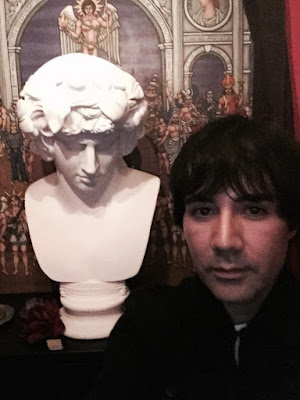 THE Lupercalia is a commemoration of the She-wolf who suckled the twin babies, Romulus and Remus, it is a celebration of the founding myth of the city of Rome, but more than that it is a time of purification, cleansing and renewal, a restoration of power.
We are told that from the earliest day the Lupercalia was celebrated by naked youths running through the city whipping women and any one they found with strands of bloody goat-skins, which was a blessing to all who received the symbolic lashings.
But the Lupercalia represents more than what it seems, it represents the end of winter and the coming of spring, the end of hardships and the coming of better days, it was one of the central ceremonies of the Roman Religion because it represents the resilience of the Roman people in the face of adversity, and it is a message of resilience to those who take up their faith now.
The twin babies Romulus and Remus were born of a virgin mother, a Vestal Virgin who had been impregnated by Mars, but as a punishment for having lost her virginity she was buried alive and her children were ordered to be killed.
The soldiers charged with killing them  could not carry out their orders so they placed the babies in a basket and sent them down the Tiber river to die in the wilderness.
The river was in flood because of the melting snows and the swollen currents carried them to what is now the Roman forum and set them gently in the reeds.
A She-wolf heard their cries and took pity on them, she carried them to her den on what is now the Palatine hill and suckled them with her tits.
A shepherd named Faustulus found the children in the wolf-den, saw the mother wolf suckling them and took them home to his wife and raised them as his own children.  As the boys grew older they became leaders of men and formed their own society, the story of how they had been raised by the wolf becoming part of their legacy.
The Lupercalia grew out of this story.
The gods are always with us, the gods are always on the side of those who believe in them and have true faith.
No matter how bad things may seem to be the gods are always there with us, protecting and guiding us, just as they protected the babies, who were helpless and tossed out into the cruelty of the wild, but the gods watched over them and brought them to safety and gave them the blessing to conquer the world...to the least they gave the most.
The Lupercalia represents this for all of us, especially now, as the Covid Pandemic is reaching its most lethal stage, even as the vaccine is being administered, this is a time for cleansing, protection and the removal of contamination.
The She-wolf is here to protect us, Mother Rome, Our Lady Venus, Mother of the Latin people, she will protect us, and prepare us for the new year which is upon the horizon.
Trust in the gods to protect you.  Those who have absolute faith in the gods have no reason to fear evil spirits.
Antinous gives us the freedom to have no fear of darkness, no fear of demons, no fear of evil spirits or ghosts, no fear of black magic...those who believe in Antinous are invulnerable to evil spirits, they can never affect us, they can never touch us, or affect our lives.
The Lupercalia is a reaffirmation of the strength and power of the Roman gods over the forces of evil.
Even in our darkest days when everything seems lost and hopeless...the gods are always with us.
Lupa the She-wolf is always there to protect us from chaos and misfortune.
This is the meaning of the Lupercalia, and it has never been as significant and global as it is now, for those of us who take faith in the power of the Roman gods and in Antinous.
Ave Antinous!
ANTONIUS N. SUBIA
Flamen Antinoalis

Posted by Hernestus at 9:30 AM