THE FEBRUARY FAUNALIA IS PERFECT
FOR VALENTINE'S EVE LOVE MAGIC 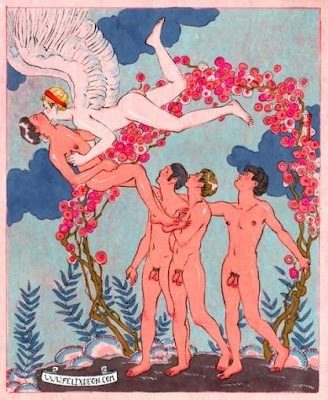 FEBRUARY 13th is the Eve of St Valentine and, of course, a day for all sorts of love magic. (Image above entitled "Cupid's Kiss" is by Felix d'Eon.)

In Ancient Rome, February 13th was the start of one of the two feasts of Pan called the FAUNALIA (the other starting on December 5th) ... and it was originally the start of the Ancient Roman festival of LUPERCALIA, which was concerned with fertility, lust and passion ... semi-nude boys chasing virgins around the walls of Rome, whipping their bottoms with thongs dripping with white goat's milk.

It is possible that Hadrian and Antinous encountered Valentinus during their stay in Alexandria in 130 AD, or at least heard of this controversial figure.

The love between them was the reason that Jesus descended to save the world, according to Valentinus, who defied the Christian sect of radicals who created the simplistic concept of hell and damnation for those who did not accept their beliefs.

He said there is no hell ... aside from the hell we create for ourselves on this earthly plane ... and that Love is the key to heaven ... not fear of eternal hellfire and brimstone.

Valentinus began his teaching in Rome, and gained so much support that he was even nominated for the Papacy ... but lost by a narrow margin. Had he become pope, Christianity would be very different today ... and so would Islam. 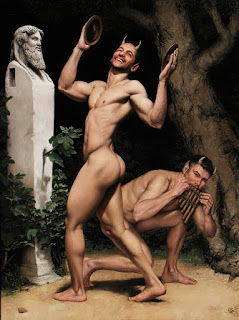 But the hellfire-and-brimstone brigade triumphed and ... as they would do so often in centuries to come ... they branded Valentinus a heretic ... condemning him to suffer the torments of hell for all eternity. (Image at left: Dancing Fauns by Carlos Barahona Possollo)

One story says that when St Valentine was waiting in prison for execution he cured his jailor's daughter of blindness and they fell in love ... a metaphor for Sophia (Wisdom) and Amor (Christos) uniting in Gnostic mysticism.

After he had been executed it was found he had left a message for the girl, scratched into the wall of his cell: "Always your Valentine."

He was dead and gone, burning in (non-existent) hell. But he was too influential and too popular to be disregarded entirely ... so he was canonized ... perhaps the only Catholic heretic to become a Catholic saint.

His detractors cloud the issue by saying he was never properly canonized and is only a "folk saint" like St. Nicholas.

Others insist there were many man named Valentinus so the heretic and saint could be different people ... but the Gnostic teachings of them all are heretical.

So one of the most popular saints is a heretic ... condemned to eternal hellfire and damnation ... because he insisted that Love, and not Fear, is the key to eternal life.

If you are a Protestant, of course, you don't believe in saints. You risk hellfire and damnation if you buy a Valentine's Day box of chocolates or allow your children to share Valentine's cards at school with their classmates.

If your Protestant Sunday School class even mentions Valentine's Day, Martin Luther will spin in his grave.

If your Roman Catholic Sunday School honors St. Valentine ... you are honoring a heretic ... worse, a Gnostic mystic.

If you are a pagan, perhaps you celebrate the Faunalia and the Lupercalia.

Regardless what you do ... you're going to Hades as far as many fundamentalist evangelical Christians are concerned.

So if you're going there anyway, you may as well try a little Valentine's Day Eve love magic. Here's what you do:

To dream of your lover, fasten a bay leaf to each corner of your pillow and one in the centre. Then when you lie in bed with your head on the pillow say seven times:

"Sweet angels in my dreams tonight
"My true love's face, reveal the sight
"Send me a Valentine imbued with love
"Both true and constant may he prove."

Count up to seven between each repetition of the spell ... and your dreams will be "ominous," as the Pagans and the Gnostics would say.