SOME EGYPTIANS USED TOXIC COSMETICS
TO LIGHTEN THEIR COMPLEXION 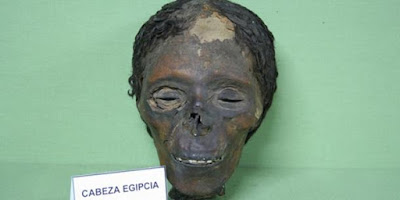 EXPERTS claim they have found evidence that the ancient Egyptians plastered on killer cosmetics to whiten their skin, and that a 3,500-year-old mummy head proves their theory.

Belonging to an anonymous woman age 20-25, the head shows tiny nodules under the cheeks and at the back of the neck that point to a possible skin disorder called exogenous ochronosis.

"Such dermatosis is caused by the extensive use of skin bleaching cosmetics," ‎Despina Moissidou, an anthropologist at Nation Kapodistrian University of Athens, Greece, told Discovery News.

History suggests that a lightened tone of the skin might have made the difference in Egyptian society.

"Perhaps it was a symbol of high social status, indicating the individual did not perform hard outdoor work or work at all, just like the deformed feet or the extremely long nails for the ancient high-class Chinese women," Angel Gonzalez, a collaborator at the School of Legal Medicine in Madrid, told Discovery News. 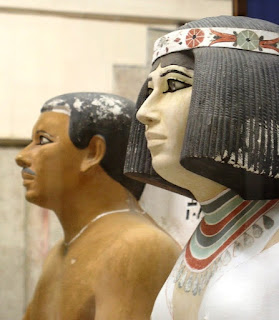 Moissidou and colleagues at the University of Madrid and Athens presented their research at the recent International Conference of Comparative Mummy Studies in Hildesheim, Germany.

The head's true origins were found only in 2007, when Moissidou and colleagues traced the mummified remains back to the Theban Necropolis archaeological area in Egypt.

The head's mummification technique made it possible to date it to the 18th Dynasty of the New Kingdom.

This is the best known ancient Egyptian dynasty as it includes several famous pharaohs, such as Hatshepsut, Amenhotep III, Akhenaten and Tutankhamun. The researchers believe the woman lived in a period between the reign of Thutmose II and Thutmose III. 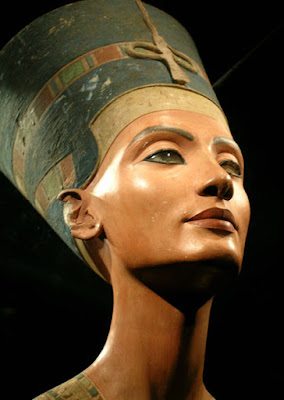 Moissidou and colleagues carried out several examinations to confirm the diagnosis of exogenous ochronosis.

"Samples were retrieved from the base of the neck and were sent for histological examination," Moissidou said.

"We know the ancient Egyptians regarded the use of cosmetics both for aesthetic purposes as well as magical and religious ones. Cosmetic pigments were indeed used on a daily basis," Moissidou said.

But many of the cosmetics used by the Egyptians included lead as a basic component, which could cause skin inflammation as well as skin diseases.

Intriguingly, the use of such cosmetics was common among members of royal families.