TUTANKHAMUN HAD A SPACE DAGGER
WITH A BLADE FROM A METEOR 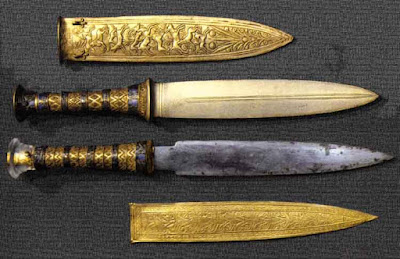 ONE of Tutankhamun's famous daggers was made of a meteoric iron that literally came from space, says a new study into the composition of the iron blade from the sarcophagus of the boy king.

And the metal came from a meteor that struck the desert west of Alexandria in pre-historic times.

Tutankhamun was buried with several weapons, including two daggers. One was a golden ceremonial dagger and the other had an iron blade. Both had golden sheaths.

While archaeologists knew that one of the blades was iron, there was no way of knowing where that cutting-edge alloy had come from at such an early date in history.

But now, using non-invasive, portable X-ray fluorescence spectrometry, a team of Italian and Egyptian researchers have confirmed that the iron of the dagger placed on the right thigh of King Tut's mummified body a has meteoric origin. 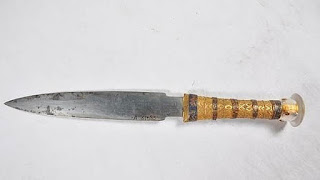 The team, which include researchers from Milan Polytechnic, Pisa University and the Egyptian Museum in Cairo, detailed their results in the journal Meteoritics and Planetary Science.

The weapon, now on display at the Egyptian Museum in Cairo, was described in 1925 by Howard Carter, who three years before had discovered the treasure-packed tomb, as "a highly ornamented gold dagger with crystal knob."

Made of non-rusted, homogeneous metal, the finely manufactured blade features a decorated gold handle. It is completed by a gold sheath garnished with a floral lily motif on one side and with a feathers pattern on the other side, terminating with a jackal's head.

Now dramatic technological improvements have allowed the researchers to determine the composition of the blade.

"Meteoric iron is clearly indicated by the presence of a high percentages of nickel," main author Daniela Comelli, at the department of Physics of Milan Polytechnic, told Discovery News. 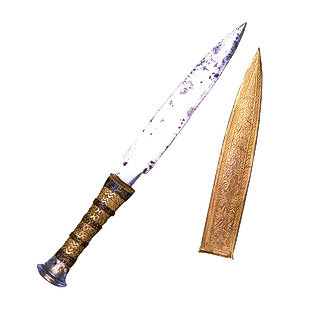 Indeed, iron meteorites are mostly made of iron and nickel, with minor quantities of cobalt, phosphorus , sulfur and carbon.

While artifacts produced with iron ore quarrying display 4 percent of nickel at most, the iron blade of King Tut's dagger was found to contain nearly 11 percent of nickel. Further confirmation of the blade's meteoric origin came from cobalt traces.

"The nickel and cobalt ratio in the dagger blade is consistent with that of iron meteorites that have preserved the primitive chondritic ratio during planetary differentiation in the early solar system," Comelli said.

Comelli and colleagues also investigated the possible source of the iron blade.

"We took into consideration all meteorites found within an area of 2,000 km in radius centered in the Red Sea, and we ended up with 20 iron meteorites," Comelli said.

"Only one, named Kharga, turned out to have nickel and cobalt contents which are possibly consistent with the composition of the blade," she added.

The meteorite fragment was found in 2000 on a limestone plateau at Mersa Matruh, a seaport some 150 miles west of Alexandria.

Earlier, experts determined that the Ancient Egyptians used meteoric iron for beads as early as 5,000 years ago ... long before the Iron Age began. The EGYPTIAN SPACE BEADS have been the subject of intense study.

It has also been long known that the Ancient Egyptians used METEOR GLASS in their jewellery.