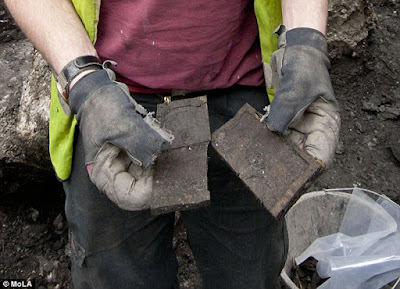 DIG down a few inches into the soil almost anywhere in Britain and you can find an archaeological treasure … as was proved twice this week.

First, construction work in the heart of London turned up the earliest known handwritten documents in Britain among hundreds of Roman waxed writing tablets ... dating back 2,000 years.

The tablets, which were used by the Romans like paper for note-taking, accounts, correspondence and legal documents, were discovered during excavations for Bloomberg's new European headquarters in the City of London. 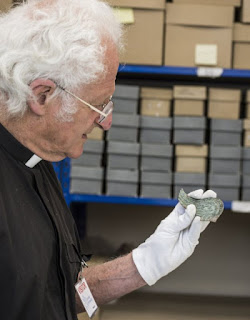 Some 410 wooden tablets have been discovered, 87 of which have been deciphered to reveal names, events, business and legal dealings and evidence of someone practising writing the alphabet and numerals.

With only 19 legible tablets previously known from London, the find from the first decades of Roman rule in Britain provides a wealth of new information about the city's earliest Romans.

Meanwhile, an "extremely rare" Roman bronze wing has been found during an archaeological dig in Gloucester.

The object, which is 14cm (5.5in) long, was found during an excavation for a new housing development in Brunswick Road, in an area that would have been just behind the city's Roman wall.

Experts say it was probably part of a winged statuette to Victoria, the Roman goddess of victory.

It will be put on display at Gloucester Museum once it has been studied.

Posted by Hernestus at 4:41 PM