POMPEII'S VILLA OF THE MYSTERIES
IN DANGER OF COLLAPSE 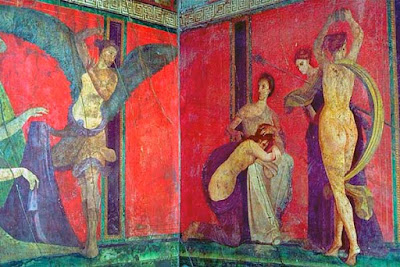 THE Villa of Mysteries, considered the "crown jewel" of the ancient city of Pompeii, is at risk of collapse due to vibrations from nearby trains mainly used by tourists and seismic activity in the Bay of Naples, a new report has warned.

The report, issued following a hi-tech study with state-of- the-art equipment by ENEA, Italy's national agency on sustainable development, comes just a few months after the restored Villa ... which features some of the best-preserved frescoes of the site ... was unveiled. 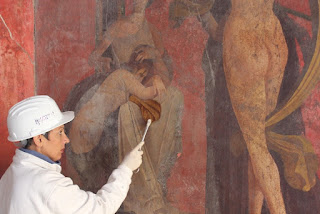 The project was trumpeted as a rare success story compared to Pompeii’s record of mismanagement and neglect that jeopardized its EU funding and Unesco world heritage site listing.

In addition to the vibrations from the Vesuvius light railway commuter trains, which ferry tourists to Pompeii from Naples, the protective structure around the villa, built in armoured cement, wood and steel 50 years ago is threatened by its own weight and water ingress.

"We have found a state of advanced degradation of many of the beams of the roof while the structure in cement in some rooms has been found to be especially vulnerable to seismic activity," said Bruno Carpani, the chief scientific officer heading the new study.

The villa is named for frescoes in one room of the suburban villa.

There are many different interpretations of the frescoes, but they are commonly believed to depict a bride initiating into the Dionysian Mysteries in preparation for marriage.

Women and satyrs are featured prominently. Because of the widely accepted theory of the mural depicting an initiation from the cult of Dionysus, some think that the room with the frescoes was used to conduct rituals and celebrations related to the god.