CAT NICKNACK ON GRANNY'S MANTLEPIECE
TURNS OUT TO BE EGYPTIAN SCULPTURE 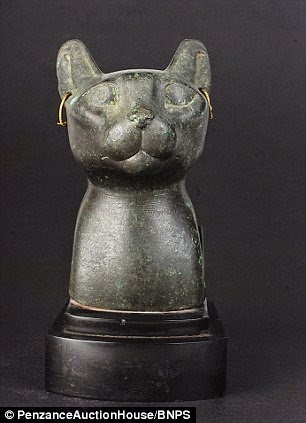 FOR years, this unusual ornament – a cat complete with delicate gold earrings – stood on the hearth of a small cottage in western England, believed to be a cheap copy of an Egyptian bronze.

When the elderly owner died, her family assumed it was worthless and were ready to throw it away.

Then an expert intervened – and his suspicion that the 7 inch (20 cm) bust might be of some value has been proved true beyond his wildest dreams.

However, it had come very close to ending up in the garbage only a few days earlier.

The statue had belonged to Doreen Liddell of Penzance, Cornwall. When she died in November, her family called in Penzance Auction Rooms to clear her house – and auctioneer David Lay saw the cat.

He too initially assumed that it was a reproduction, but took it back to his office for a closer look. Only then did he realise how old it could be.

When he shared his discovery with Mrs Liddell’s family, they told him her late husband, Douglas, had once been managing director of the prestigious Spink and Son auction house in London. The firm, founded in 1666, is renowned for its sales of Ancient Egyptian artifacts.

In 1939, Spink sold the estate of archaeologist Howard Carter, who discovered Tutankhamun’s tomb. It is thought Mr Liddell bought the 2,500-year-old cat at a Spink sale, although his family has no record of it.