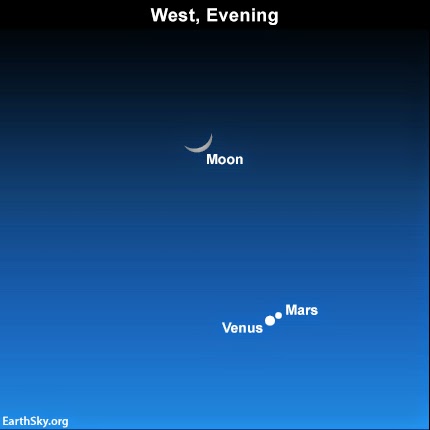 Animals acting strangely? Children unruly? You feel nervous and anxious?  Don’t worry, you won’t be imagining it this weekend.

Dogs barking at the sky, moments of madness and unexplained events could be triggered by a rare alignment of the planets.

Mars, Venus and the Moon are all due to come together in a beautiful and captivating star formation over the next few days.

The spectacular light show will see a sparkling and brilliant white Venus snuggle up to the Red Planet beside a crescent Moon.

Astronomers are hailing the event as one of the most dazzling space formations of the year with the luminescent orbs visible to the naked eye.

However ancient mythology warns the eerie phenomenon could have a darker and more sinister purpose.

A similar Venus-Mars alignment in May 2011 coincided with a spate of severe thunderstorms, floods and tornadoes in America.

Devastating winds ripped up trees and power cables as they tore through the state of Kansas, the most notable being the Joplin tornado.

Astronomers around the world will be closely watching as the three planets snuggle together.

Viewers should keep an eye out out for a dazzling white Venus, next to Mars which will appear as a dull red glow joined by a crescent moon.

Venus and Mars will edge closer together and will sit in alignment until Tuesday when Venus pulls away from Mars to continue its orbit.