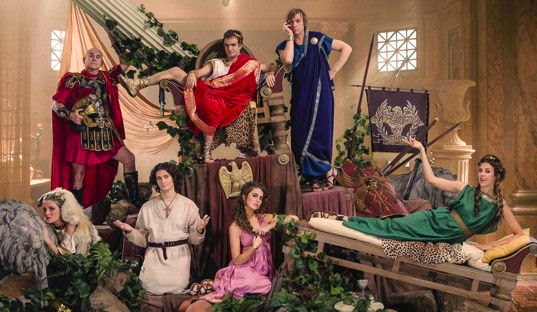 FOR those who don't keep up with trash movie slang, "peplum" is the meme for those cheaply produced vintage European gladiator movies that used to be called "sword and sandal" flicks ... because the men always had swords and sandals.

But the cheap costume worn by everyone in the movie was always a peplum ... a tunic gathered at the waist.

Voilá ... a movie genre becomes a concise catchphrase that fits nicely in a Tweet!

Now PEPLUM is a popular new French television sitcom mini-series which wryly tweaks modern-day viewers into realizing we are all living in a civilization in decline run by buffoonish masters and slaves ... and it's hard to say who are the masters and who are the slaves.

The concept? With the Roman Empire in decline, Bravus - former slave - tries to avert chaos as adviser to the terrible Emperor Maximus... terrible in the sense of incompetent.

Unfortunately, his efforts to maintain sanity are continually thwarted by his own crazy family and his equally mad boss.

And if that sounds like your own life, that's exactly what the producers intended for this series which has just premiered on M6 network starring French funny man JONATHAN LAMBERT.

Check out this promo: