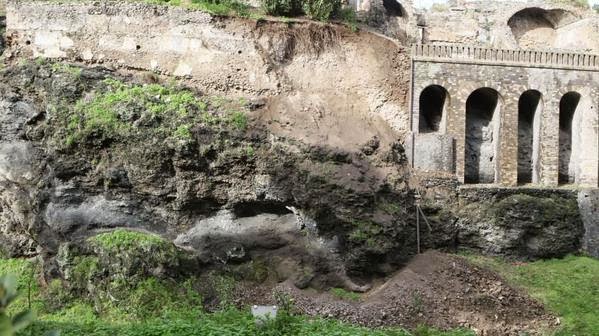 A rain-spawned mudslide caused a wall in the ancient city of Pompeii to fall down, the latest in a series of weather-related collapses at the country’s most celebrated archaeological site.

The wall in the Garden of Severus suffered a partial collapse after days of rainfall in southern Italy. Severus was the name of the fictional city governor in last year's 3-D blockbuster movie POMPEII.

In addition, a portion of a "Pompeii Red" fresco plaster crumbled at the nearby HOUSE OF THE CENTENARY.

The area around the House of Severus was sealed off to visitors after the discovery was made by staff at the ancient site.

The Garden of Severus is already part of the Great Pompeii Project, a multi-million euro fund from the EU and Italian government to protect the area.

An agreement is also being set up with the fire service to intervene in inaccessible parts of Pompeii which are at risk, the superintendency said.

The incident at the Garden of Severus is just the latest in a series of COLLAPSED WALLS DUE TO RAIN at Pompeii, which was destroyed by a volcanic eruption in 79 AD.

Culture Minister Dario Franceschini last March promised to unblock €2 million in restoration funds, after the Temple of Venus and Pompeii walls were damaged by rainfall.

Despite the site winning funding to the tune of €105 million, the Italian authorities have been criticized for being woefully slow in implementing restoration plans.

Unesco has also weighed into the debate, threatening in 2013 to scrap Pompeii from its prestigious World Heritage list if measures were not taken to save the ancient site.